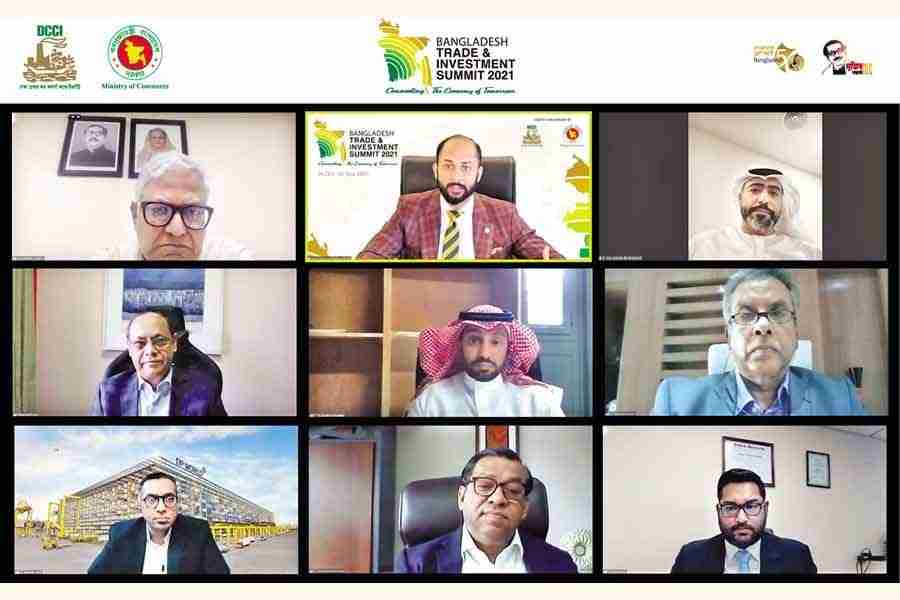 At the same time, they urged authorities concerned to encourage businesses from the ME countries to invest in food processing, chemicals, gas and petroleum, power generation, cement and construction, telecommunication, and financial sectors in Bangladesh.

The event was held on the sidelines of a seven-day Bangladesh Trade & Investment Summit 2021 that started on October 26 last.

Economic Affairs Adviser to the Prime Minister Dr. Mashiur Rahman addressed the program as the chief guest while UAE acting Ambassador to Bangladesh Abdulla Ali AlHmoudi spoke as the guest of honor.

Addressing the webinar, Dr. Mashiur Rahman pointed out that Bangladesh’s stable and upward economic growth offers a very favorable time to invest in its infrastructure sector.

“While many countries face difficulty recovering from the pandemic shock, Bangladesh’s economy has shown resilience which should be considered by the foreign investors,” he added.

He said the country has moved from an agriculture and labor-intensive economy to a service sector-based economy while it has also entered the era of manufacturing household electronic products.

The PM’s adviser also said that there is a huge opportunity for foreign investors to put their money into the sophisticated technological industry, active pharmaceutical ingredient (API) production, and the generic drug market.

Dr. Rahman also highlighted that the halal food produced in Bangladesh can grab a huge market in the ME countries.

Mr. AlHmoudi said there is a large room for expansion in terms of bilateral trade and business between Bangladesh and UAE as Bangladesh has progressed a lot in the past decade led by its private sector.

He suggested the businesses of both countries hold frequent talks to increase trade through proper planning.

The envoy termed the bilateral relation deep-rooted and said that the UAE had started from scratch in the 1970s to reach today’s position in the world and it wouldn’t have been possible without the hard work of Bangladeshi workers over the years.

To strengthen the bilateral trade relation further, a Bangladesh-UAE business council may be formed in near future, he said.

In a presentation, DCCI President Rizwan Rahman noted that around 3.0 percent of Bangladesh’s export is destined to ME countries whereas around 4.0 percent of its imports are received from that region.

In the meantime, over 55 percent of the country’s total inward remittance comes from the ME countries, especially from Saudi Arabia and UAE.

The inflow of foreign direct investment (FDI) from the Middle East and West Asian countries to Bangladesh stood at US$123.51 million as of 2020 which is lower than that of $175.50 million in 2019. The FDI has declined due to the adverse impact of the pandemic.

Terming the halal food market an untapped sector, Mr. Rahman viewed that the investors from the ME region could go for joint-venture projects with Bangladeshi entrepreneurs to explore the true potentials of the halal food sector.

He also emphasized pursuing strong economic diplomacy with the gulf nations to ensure increased labor supply with a view to increasing remittance inflow.

Though Bangladesh has been one of the largest manufacturers of RMG with an annual export volume of over $35 billion, only around 1.0 percent of its products go to the Middle East, he said.

He urged the ME countries to import more from Bangladesh as the country has been on the leaderboard of environment-friendly manufacturing with more than 150 green factories.

Mr. Al Jedaie said that they were interested to invest in the food processing sector in Bangladesh with a view to exporting it to Latin American and African markets.