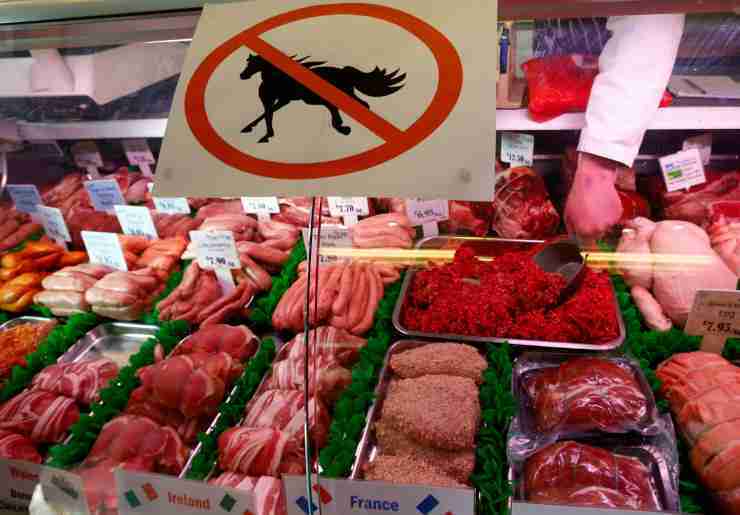 This halal meat scandal has made Malaysians victims of food fraud. In fact, food fraud has become a serious challenge for Muslims all over the world. The Muslims have seen their share of cases in recent months in different parts of the world.

The Halal meat scandal that was uncovered last month in Malaysia has outraged the nation. Not only was the meat not Halal, but it also might not even be beef in the first place. The scandal has shattered Malaysian Muslim consumers’ confidence in suppliers and the authorities entrusted to ensure the food they consume on daily basis is actually Halal.

The meat was imported from countries that JAKIM, the Malaysian Halal Certification body, does not approve of. The smugglers, dubbed as a meat cartel, worked together with corrupt officials at Malaysia’s ports to declare that the meat came from approved countries.

Once the meat arrives at domestic warehouses, the method to commit this food fraud is simple. Repackage the meat as Halal using an authentic Halal logo and distribute them together with Halal meat. Halal food fraud is as much a religious issue as it is one of public health.

Is QR Code Technology the Answer?

Well, the answer is yes and no. QR code is part of the ecosystem, but it cannot be a stand-alone solution. It is said that the current manual process makes Halal certifications easier to fake, as duplicates of the original certificates can be printed with just a computer and simple editing software.

So, it is suggested that a QR code may be the answer. The problem is that there is nothing stopping you from snapping a QR code from a legitimate product and printing it on fake packaging.

Yes, QR codes can work, if it is supported by other technologies that can verify the authenticity of a product. If not, the QR code will just be like another legitimate halal logo illegally printed on a fake product.

Looking to Industry Expert Advice on Prevention of Food Fraud

Halalop.com spoke with OneAgrix co-founder and CEO, Diana Sabrain, about Halal traceability and the technology required to ensure food traceability.

Halalop first spoke with Diana on combating food fraud back in November 2019, and with the latest issue of the Halal meat scandal, we spoke with her again to find out more about the technology needed to prevent such a scandal from occurring again or at least mitigating it exponentially.

OneAgrix is a business-to-business (B2B) e-commerce marketplace for Halal food products that focuses on international cross-border trades. The company’s B2B marketplace uses Industry 4.0 technology, such as blockchain, to verify the authenticity of food products and Halal status. OneAgrix is also an official partner of the International Trade Centre (a joint agency between the United Nations (UN) and the World Trade Organization (WTO)) on cross-border trade in emerging markets.

The outcome of this Halal meat scandal has highlighted the importance of knowing exactly where your food comes from. Tracing the source of food is not only important for its Halal status, but also for knowing that it is what it says it is (i.e., it is beef, not a horse or kangaroo meat), where the food originates and that it is safe to consume (not contaminated or diseased).

According to Diana, “QR codes are already in use in the food industry. QR codes can just be repackaged easily.”

“Malaysia is now in the spotlight on Halal meat scandal as Malaysia holds the highest standard of Halal, and as such, is accountable even more. However, food fraud is a global problem, not just in Malaysia.”

Blockchain technology alone however is not enough to solve the problem of food fraud. It is just one part of the puzzle to the entire solution. “In solving this issue there has to be a mix of serialization technology, as well as artificial intelligence (AI), machine learning (ML), Internet of Things (IoT), and blockchain technology,” said Diana.

These combined technologies are known as Industry 4.0 and are part of the government’s policy to embrace high technology for Malaysia to be globally competitive.

“However, it’s not enough to just say that the certificates can’t be counterfeited”, said Diana.

The other part of the equation is the science behind the food. Are the food items really as declared in the packaging? Are they pure or contaminated with other ingredients? Do they really originate from the place where they were declared? These are the scientific elements that have to be tackled.

Diana elaborated, “Once the data is stored on the blockchain, the data has a 99.99% certainty that it cannot be tampered with as no single user has control of all the data.”

Blockchain technology is the technology used to power bitcoins and other cryptocurrencies.

The data is stored across multiple parties, known as distributed ledgers, instead of in one centralized system. The technology is secured with cryptography technology and coupled with the decentralized system, make it extremely hard for hackers to tamper with the data stored on the blockchain.

“But at the end of the day, what makes one think the data is real? There’s a known industry saying, garbage in, garbage out. This is especially true for bad players in the food supply chain.”

“That’s where scientific provenance comes in.”

A Walkthrough of the Technology to Verify Halal and Food Safety

For some consumers, the trust element in Halal meat has been clearly shaken. Some have argued that how can the Halal practice be ensured in locations far away from Malaysia.

Diana explained, “To ensure that the slaughtering of meat is done in the prescribed Halal manner, IoT sensors using video recording can be the eyes and ears to ensure they are done correctly. The video data would be stored on the blockchain, and as the data stored on a blockchain system can’t be tampered with, say by editing the video, then it is possible to ascertain that the halal standard has been adhered to at the abattoir stage.”

The next step would be the meat preparation, where they would be cut and packaged. Here, the integrity of the food can be done via DNA traceability. A sample DNA of the meat composition would be taken prior to being packed, and the DNA data would be stored on the blockchain.

They can then place a unique identifier (indelible, edible markers) on the meat which can identify which batch the meat comes from (before they are packed).

There’s also a unique Ink identifier on the packaging, known as serialization technology, which can be placed on a normal package or even on a QR-coded package.

The last step involves market surveillance – which is random checks on the meat or food items done at warehouses or supermarkets. The checks are done on the products to check if they have been repackaged with counterfeit packaging, via the unique Ink identifiers on the packaging.

“Hence, you can see that using QR code just solves one part of the packaging problem, but not the entire food traceability issue,” said Diana.

How OneAgrix Uses Technology To Verify Halal and Food Traceability

“In an e-commerce environment, especially in B2B cross-border transactions, there are many certifications involved: ISO certificates, paid stamp certificates, Halal certificates, and export certificates, which in the case of the meat cartel, are relevant. Especially for B2B buyers buying online, how do they know the certificates are real?” said Diana.

This is where OneAgrix comes in.

“OneAgrix uses blockchain technology at the data provenance level to ensure that these certificates are real, untampered documentations.”

“We use serialization technology which has secured over 100 billion products annually, and the technology is used in the European Union (EU).”

The EU has legislated that serialization technology is to be used for pharmaceutical products.

“OneAgrix’s mission is to ensure that global halal trade is fully transparent from source to destination and that consumers can be assured that the authenticity of halal products has been maintained throughout and has not been fraudulently altered at any stage.”

How Much More Does the Technology Cost?

According to Diana, the technology is still cheap, at a range starting from USD0.10 – USD1 (RM0.40-RM4) per kilogram of food items. The price ranges depending on whether they are processed foods or agricultural foods, and on the volume.

“People think that when it comes to technology that it is high costs and high overheads. However, losing consumer confidence (and losing sales) is more painful than investment.”

“Even small-scale farmers in Africa can afford food traceability technology.”

The International Trade Centre, a joint agency by the UN and WTO, partners with OneAgrix due to the affordable food traceability technology the company has. The technology is a DNA test kit known as the Rapid Solution Test kit, used to check whether food has pork derivatives and can also be used to check agricultural produce. This works in combination with DNA traceability technology and is uploaded onto the blockchain as well.

OneAgrix is using the DNA test kit technology to help small scale farmers who can’t afford to pay for certifications.

“At least the small-scale farmers can show proof to buyers that their food products do not have haram food derivatives in them. This is how we help them to convince buyers, by using the DNA test kit to ensure that there are no pork derivatives.”

For food manufacturers who are already printing their own packaging, the only additional investments are to purchase the indelible ink identifiers to be placed on their packaging.

The global Halal food is estimated to be worth USD1.17 trillion (RM4.7 trillion)of consumer spending based on the report on the State of the Global Islamic Economy 2020/21. Malaysia is currently the leading global Halal hub, with an estimated export value of Halal products of RM35.4 billion, or 5.1% of GDP.

However, Halal meat fraud has shaken the Muslim consumer trust in Malaysia’s Halal certification. As this scandal becomes globally known, especially in other Muslim majority countries, consumers’ and importers’ trust in Halal Malaysia certification would be crucial to maintain or regain, especially as it would significantly impact Malaysia’s GDP.

In the food supply chain globally, fraudulent suppliers are everywhere in cross-border trades. Using food traceability technology will reduce the number of fraudulent players from entering the food industry. This is because the technology makes it harder and more cumbersome for the bad players to hack into.

How can food manufacturers and suppliers increase sales, domestically, and abroad?

Food traceability is about giving back the power to consumers. Right now, the industry and consumers are relying too much on certification bodies or customs which have limited manpower and weak links that allow halal food scandals to happen all over the world.

Food traceability is the issue that plagues the Halal sector, which has a solution that exists today. The solution is food traceability technology. The halal food industry is big enough for other players who sincerely want to provide a solution.

“It’s not just OneAgrix, there are other stakeholders out there who can contribute to the solution,” said Diana.

The problem is no longer an elephant in the room, it is already out in the open and the solution is available. Most importantly, it is even affordable to small-scale farmers and food growers. All that is needed to be done is for the stakeholders to take action.

Pakistan, UAE To Boost Bilateral Trade
Next Post:SOPs On Halal Food Products To Be Issued In Malaysia