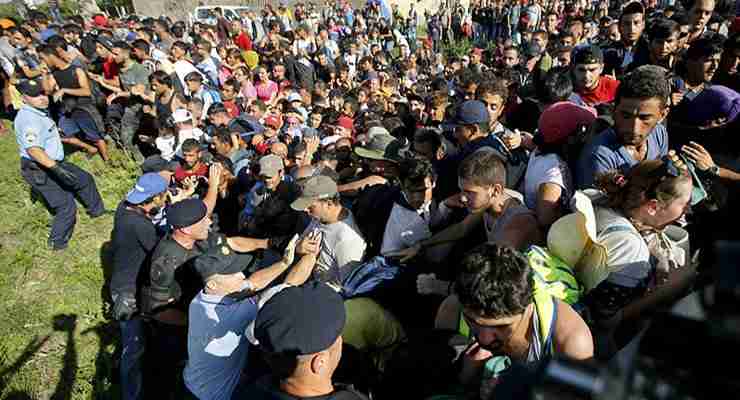 Dubai – Over recent months, the European Refugee Crisis has dominated news headlines. At the same time, tens of thousands of Halal ready-to-eat meals are on their way to Southern Europe, having been produced by Saahtain Foods in Dubai and purchased by charities in the UK and corporations in the UAE. For many of the refugees, traveling on foot to their destination in Northern Europe, it has been months since they had a halal meal. The refugees are fleeing conflicts in Syria and Iraq but unfortunately, many are finding developed European countries to be similarly hostile. Footage of a refugee camp, filmed by the wife of an Austrian politician, caused outrage with headlines such as, “People treated ‘like animals’ in Hungary camp.”
(Photo: http://photos.prnewswire.com/prnh/20151029/281812 )

UK Charity Rahma Mercy bought thousands of meals to distribute in Albania and Serbia. Charity trustee Abdul Aziz Moti said, “Tayyib meals are the most effective way to feed the refugees, who are quite malnourished due to their hardship. Tayyib Meals are ready to eat, Halal, nutritional and last 12 months without refrigeration. How else will they get halal food on the roads and villages of southern Europe?”

New UN figures suggest more than 700,000 refugees have crossed the Mediterranean into Europe in 2015, the worst migration crisis since the end of the Second World War. Unless their journey is made easier, there is a risk of similar scenes as those seen during World War II, with hungry civilian refugees looting warehouses for food. For Samhain Foods, this translates into their philosophy of “Feed Easy, Halal Relief”. Those values are reflected in Saahtain Foods’ Tayyib meals, as the food prepared is easily mobile, accessible, sustainable, and is produced entirely in the UAE.

“We are again humbled to be part of a solution to the challenges of feeding refugees on foot,” says Adeel Ali Khan, Founder, and CEO of Saahtain Foods. “A Dubai firm providing food assistance to refugees and collaborating with charitable organizations as far away as Europe is a fact to be proud of. It will be a genuine #RefugeesWelcome.”

Recently, Tim Farron, a British politician tweeted, “the situation in Lesvos is horrific. Around half of the refugees currently in Europe have, or were, on the island.” Lesvos is where Saahtain Foods is sending its next container load of #tayyibmeals.