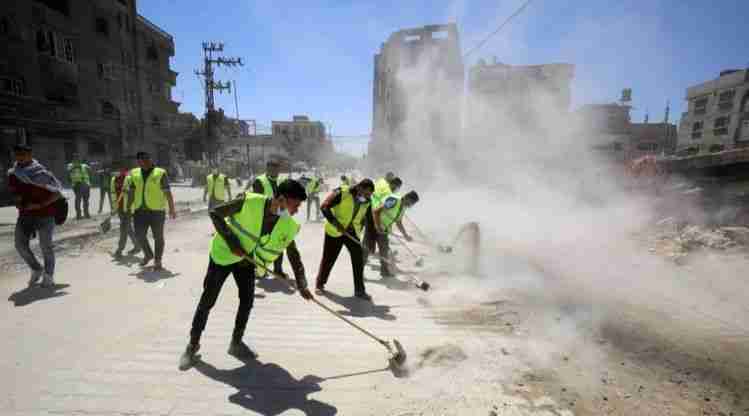 Following one of the toughest and most devastating military operations against the Gaza Strip earlier this month, Gazans are now counting their losses. Two million inhabitants of the coastal strip that has been under blockade for well over a decade experienced their most difficult time during the 11 days of adversity. Some 240 were killed including women and children, in addition to massive damage that has affected every aspect of the infrastructure of the Gaza Strip. Power, water, and wastewater lines were continually targeted, while the internet and other essential services were cut off occasionally.

The region is no stranger to such atrocities, following three equally devastating wars in 2009, 2012, and 2014. What’s different this time was the size and amount of destruction for civilian utilities, buildings, houses, and businesses alike.

It is often said that Gaza houses the toughest environment for business on the planet. But this was an understatement compared to what was seen over the past weeks. With the dust from the bombs slowly fading away, entrepreneurs have been assessing the damage to their businesses.

The Business and Technology Incubator in Gaza has conducted an initial survey to count the number of startups and business owners affected by this adversity and their call has received over 1,100 responses from entrepreneurs, business owners, and others. Their initial survey shows that at least 25 startups were directly damaged, housing 243 employees, with 6 of them having their offices destroyed.

The impact on startups was huge

One of the affected startups was Tashkeel 3D, the first business to produce 3D-printed materials used for medical and academic purposes. The business began as an idea to enable the printing of 3D parts for amateurs in Gaza and has grown to work with several local and regional organizations operating in the Strip, including Doctors Without Borders and Glia Foundation. Before the bombing, the startup had developed a flagship medical mask for people with burns, and a tourniquet to help uplift injured limbs.

Upon hearing the news of destruction to its office building, Tashkeel co-founder, Mohammed Abu Matar said: “I was devastated with the news. I didn’t expect the damage and destruction to be that much. Now I feel back to point zero, but I will sustain this work, not for myself, but the patients waiting for our products.”

Mohammed and the team have invested and received over $100,000 worth of equipment and equity over the past four years that they are hoping to replace with the help of the startup community in neighboring countries. Check out their funding campaign here.

Another entrepreneur who suffered is Motasem Mortaza, who about a year ago founded Record Media to film and produce documentaries and motion graphics. During the bombing, the company’s new office along with $15,000-worth of equipment vanished into thin air.

While the bombing has targeted educational establishments for years now, AbdelRahman Awad, founder of Clever Toys, was devastated this time. His startup lost its five employees as a result of having its offices destroyed.

Clever Toys focused on creating interactive educational hardware games to help children better understand and learn the basics and electricity and machinery. He had a wide clientele among various primary schools across the Gaza strip.

“It is difficult to imagine investing all of your energy and time over your startup over the past years and having it all vanish in a single second until you experience it,” said Abdel Rahman. “We are working on bringing our business back by rebuilding our equipment and offices with the help of friends and the community.”

Clever Toys has also launched an online funding campaign that you can check out here.

Collaboration and peer support was evident

Through all this destruction, calls for grassroots youth activities to remove the rubble and help those affected were evident throughout Gaza.

The Business and Technology Incubator has offered refuge to all startups who have lost their offices and equipment until they can stand back on their feet. Director Basel Qandeel said that the incubator itself was damaged to some degree, but still has some offices and utilities in operation to support struggling entrepreneurs.

The long-term impact of this adversity is yet to be seen, the challenges brought upon the startup ecosystem in Gaza and its supporters are increasing, as is the support and attention it is getting. Only time will tell if these entrepreneurs will be able to rise from the ashes once again.