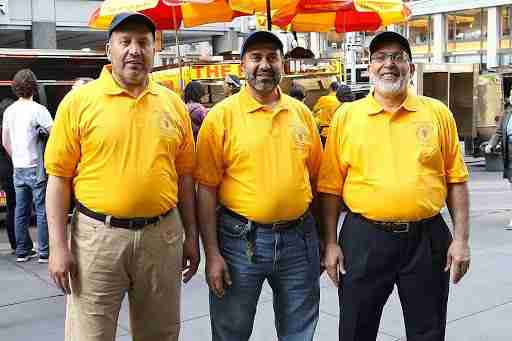 AJ Ahmad has come a long way from his college days washing dishes and working as a tutor to pay the bills while sharing an apartment with roommates.

He owns a restaurant now.

The immigrant and Chandler resident, who moved to the Valley in 1993 from Abu Dhabi, United Arab Emirates, is excited to be the CEO of the franchise team that owns The Halal Guys Tempe on South Rural Road near University Drive.

It’s the first and only brick-and-mortar The Halal Guys in Arizona for the international franchise, but Ahmad and his team plan to add three or four more stores a year until they have 15 in the state.

Ahmad earned a bachelor’s degree in electrical engineering from Arizona State University in 1999 after moving to the Valley at the age of 17. His older brother lived in the Valley but moved to Texas after Ahmad’s first semester at ASU, leaving him alone in a new city.

The budding entrepreneur made ends meet by tutoring students for $4.15 an hour in chemistry, physics, and math. Ahmad said learning English was “very easy” but he struggled to understand why Americans use certain expressions, including “wearing cologne.”

He added he also discovered in the United States that “everybody has their own opinion” and speaks their mind.

Now Ahmad said he loves the “comfortable feeling” of Tempe, which is his “second home.”

“The Halal Guys encompasses all (of) what I know in one location, my memories; my loyalty to the ASU brand, everything just here,” Ahmad said.

He said people lined up to try the food at The Halal Guys Tempe during the grand opening in late January, and he and his staff served about 1,000 meals that day.

Customers can order a platter or a sandwich with either one of two of the following: chicken, a beef gyro, or falafel with rice, pita, lettuce, and tomatoes for $6.95. The platters and sandwiches are served with a bold and tangy white sauce or a fiery hot, red sauce.

Fries alone and a pita with either hummus or Tahini sauce are $3.45 each.

Ahmad adds that the Tempe restaurant attracted 100,300 followers on Instagram before it opened.

He’s proud to employ 45 workers. By the time the 15th The Halal Guys is opened in Arizona, he will have more than 500 employees.

Three immigrants from Egypt started The Halal Guys franchise as a hot dog cart in 1990 in New York City. As their small business expanded, the three men heard Muslim cab drivers say they were trying to find halal food in the city, so they added their now-famous platter of chicken and gyro over rice, as well as the white and hot red sauces.

Founders Muhammed Abouelenein, Ahmed Elsaka, and Abdelbaset Elsayed have more than 200 restaurants being developed around the world and franchise agreements in California and several other states.

Ahmad, who used to own Edible Arrangements stores in Ahwatukee Foothills and Gilbert from 2006 to 2013, said he had originally asked The Halal Guys founders if he could open a franchise in California. He owns a trampoline park in California and travels there often, but California was sold out.

“I said, ‘I love Arizona; I would love to take it to Arizona,’” Ahmad said. “I told them, Tempe; that was my vision.

“I’m Muslim and I don’t want to have any alcohol or pork products in it (food),” he added.

Ahmad, a married father of two children, said he shook hands with The Halal Guys founders in New York and they were “very down-to-earth people.” He fell in love with their food when he tried it shortly after the franchise founders opened their first restaurant in New York.

Steve Chucri, president and CEO of the Arizona Restaurant Association, is happy The Halal Guys Tempe has opened. He’s of Lebanese descent and said he thinks “there’s always demand” for Middle Eastern food in the Valley.

“I think they’ll find success in this niche of the restaurant industry,” Chucri said. “I look forward to trying their food.

“You’ve got some great culinary diversity right there in Tempe,” he added.

The Halal Guys Tempe has partnered with delivery service UberEATS so people in the area can get the restaurant’s food delivered to their door.