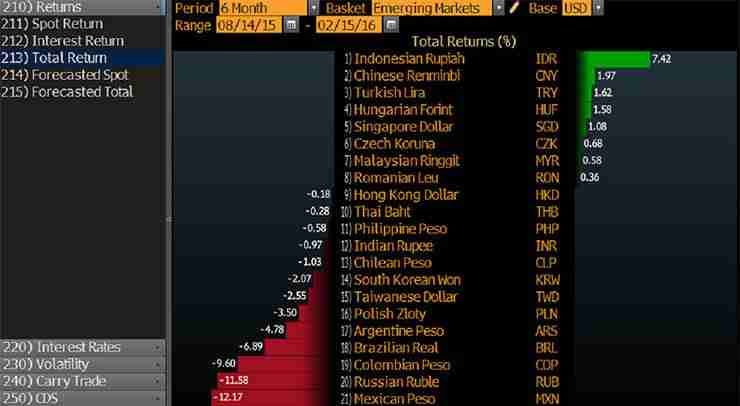 The rupiah is the top-returning emerging-market currency in the past six months and Indonesian sovereign bonds are the best in Asia as President Joko Widodo cuts red tape and opens up more industries to foreign involvement. Fourth-quarter economic growth beat analysts’ expectations and overseas investors have pumped almost $5 billion into the country’s local-currency sovereign debt since Sept. 30.

“Growth is good and Indonesia is, among emerging-market credits, especially in the investment-grade space, one of the strongest,” said Sergey Dergachev, a senior money manager who helps oversee about $13 billion of assets at Union Investment Privatfonds GmbH in Frankfurt. “I do like Indonesia fundamentally and would definitely take a look at a Sukuk paper,” he said, adding he was targeting a yield of 5.15 percent to 5.2 percent.

Investors in the rupiah have reaped a total return of 7.4 percent over six months through Monday, the most among emerging markets. Indonesia’s local-currency sovereign bonds have rallied 8.3 percent over the same period, according to Bloomberg indexes. Foreign investment in the notes peaked at an unprecedented 590 trillion rupiah ($44 billion) last week, more than 39 percent of the total outstanding debt.

Indonesia will sell as much as $2 billion of Islamic notes, people familiar with the matter said Jan. 27. The government has mandated five lenders including Citigroup Inc. and Deutsche Bank AG for the sale, they said.

Indonesia’s 10-year global Sukuk may beat that of crude exporter Malaysia this year if the oil price keeps weakening, said Hasif Murad, an investment manager at Aberdeen Islamic in Kuala Lumpur. This could be further reaffirmed if President Widodo manages to push through key reforms and speed up infrastructure development, he said.

Widodo is planning to boost spending on roads, ports, and power plants this year, as well as grant a tax amnesty in an attempt to get individuals and companies to repatriate funds. Restrictions were relaxed on foreign investment in toll roads, logistics, and cinemas last week and the president said the nation can’t afford to join the Trans-Pacific Partnership free trade agreement.

While Indonesia’s sovereign notes are beating their peers the yield premium that investors demand to hold the nation’s high-yield company bonds over Treasuries has almost doubled in the past 12 months as two repayment failures made investors nervous.

Southeast Asia’s largest economy beat analysts’ forecasts to expand 5.04 percent in the fourth quarter, the most in a year. The government is targeting 5.3 percent growth this year, compared with a six-year low of 4.8 percent in 2015. A Bloomberg gauge of raw materials prices has rallied 5.2 percent since reaching a record low on Jan. 20, while emerging-market stocks have rebounded over the past month.