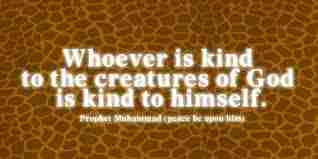 Islam And Animals: Treatment Of Animals

We have been hearing recently that the Muslim way of slaughtering is not humane for animals. There is not an animal on earth, nor a bird that flies on its wings, but they are communities like you…

Muslims believe that: all living creatures were made by Allah Allah loves all animals exist for the benefit of human beings

Muslims are instructed to avoid:

The Qur’an explicitly states that animals can be used for human benefit.

It is God who provided for you all manner of livestock, that you may ride on some of them and from some you may derive your food. And other uses in them for you to satisfy your heart’s desires. It is on them, as on ships, that you make your journeys.

There are many stories and sayings of the Prophet that demonstrate his concern for the welfare of animals. Once someone travelling with the Prophet took some eggs from a nest, causing the mother bird great grief. The Prophet saw this and told the man to return the eggs.

The Prophet said “Whoever kills a sparrow or anything bigger than that without a just cause, Allah will hold him accountable on the Day of Judgment.” The Prophet explained that a killing would be for a just cause if it was for food.

Muslims are only allowed to eat meat that has been killed according to Sharia law. This method of killing is often attacked by animal rights activists as barbaric blood-thirsty ritual slaughter.

Muslims disagree. They say that Islamic law on killing animals is designed to reduce the pain and distress that the animal suffers.

These are the rules for Islamic slaughter:

Is this a cruel way to kill an animal?

Some experts say that the animal killed in this way does not suffer if the cut is made quickly and cleanly enough, because it loses consciousness before the brain can perceive any pain.

Other experts disagree and say that the animal remains conscious long enough to feel severe pain.

Secular animal slaughter involves pre-stunning animals so that they are unconscious before they are killed. Until recently Muslim law has not permitted pre-stunning.

Muslims feared that pre-stunning might reduce the amount of blood that could drain from the carcase and also because they thought that the animal was sometimes killed by the stunning.

But recently (2004) Masood Khawaja, president of the Halal Food Authority, stated that it was not against halal practice to “immobilise” animals, provided they were not actually killed before their throats are cut.

Halal meat imported to the UK from New Zealand is stunned before slaughter. Masood Khawaja said that this was acceptable to Muslims, provided the religious rites were observed.

It is acceptable as long as the animal is not dead prior to slaughter, all flowing blood has been drained, and a Muslim has done the ritual slaughter.

According to Al Hafiz B A Masri, using animals for research may be permitted in Islam. The animals must not suffer pain or mutilation and there must be a good reason for the experiment:

Actions shall be judged according to intention. Any kind of medical treatment of animals and experiments on them becomes ethical and legal or unethical and illegal according to the intention of the person who does it.