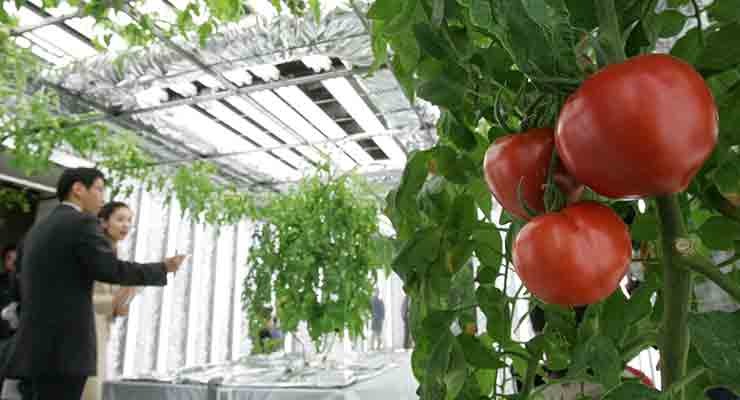 Those potatoes grown on well-drained sandy soil near the sea are special bland called ‘Naruto Kintoki’. These are more sweet and expensive than normal sweet potatoes. Farmers are using the latest cultivation methods to not only maintain the taste but ensure that they remain healthy and organic.

‘Naruto Kintoki’ is exported to Thailand, Hong Kong, and Singapore. Different kind of snacks is made of ‘Naruto Kintoki’. The latest among all is ‘Halal sweets’.

“The food with halal authentication means it can be consumed not only by Muslims but Japanese also. The halal cake is going to be served as dessert for business-class travelers by Middle East-based airlines. Many shops in Tokushima prefecture are trying to get halal authentication these days,” said the senior sales manager, Ichiokaseika, Keiko Yoshida

‘Soba’, (buckwheat noodle) shop has got halal authentication and it entertains Muslim customers.

Japan is giving emphasis to the latest technology and methods in the agriculture sector.

At a recently held Agri World Expo, various kinds of agricultural technologies and supplies were introduced. It has attracted agricultural industry professionals from all over Japan and Asia. Sanshin Metal Working Co.Ltd. introduces multi-stage cultivation racks. It enables to the harvest of plenty of crops per unit area.

It uses artificial LED lights and wavelengths to raise productivity. It also used a hydroponic system to produce crops.

“The hydroponic system enables to control many things like water supply or absorption of nutrients. It means that we can make high-value-added vegetables. For example, we can make a vegetable that is rich in beta-carotene. If there is someone who can’t eat too much Kalium, we can make it with low-calcium. The system can make that kind of functionally-rich vegetables,” said Sanshin Metal Working Co., Ltd., Hiroyuki Arai

An advanced system for the greenhouse with a non-digital, simple system was also introduced at the exhibition. It uses an automatic fan run by wind power. What is great about the system is that it can control how strong the fan moves.

The secret of it is the valve inside of the system. It closes and opens according to the temperature of the greenhouse. What makes it possible is the simple system of the spring which expands and contracts with temperature swings.

“This system is very interesting. Japanese agricultural industry has been introducing many digital systems but this is a non-digital system and is useful anytime, anywhere even at the time of disaster. It is durable and economical. So it can be used anywhere in the world. It would be great if it’s used overseas,” said Seibi Environment Chemistry Co. Ltd., Kazuhiko Fujimori

As the fan doesn’t need electricity and is economical many farmers are happy to introduce it.