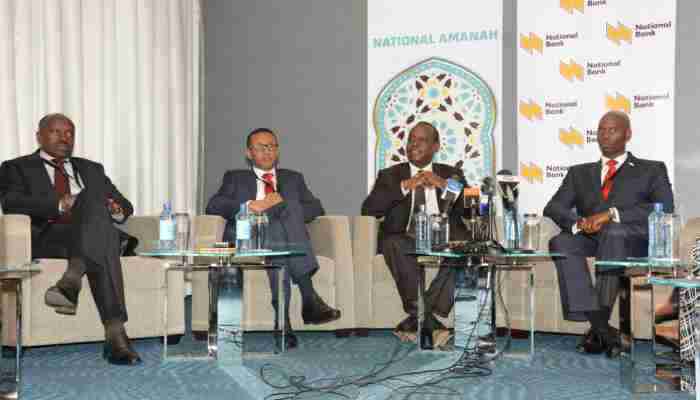 Nairobi:- When Peter Njuguna received an application for an Islamic Sacco, he nearly approved it. The head of Sacco supervision at the Sacco Societies Regulatory Authority (Sasra) told a room full of regulators last week that what stopped him was discovering that the team that headed the Sacco had never held an official meeting. “We had an application very recently for a Sharia-compliant savings and credit co-operative, which we almost approved, and the guys were telling us it is compliant, yet the committee had never even met,” Mr Njuguna said.
This is what regulators like the Central Bank of Kenya (CBK), Insurance Regulatory Authority (IRA), Capital Markets Authority (CMA), Retirement Benefits Authority (RBA) and Sasra have to grapple with as Islamic finance grows in Kenya. Yet, despite their efforts, some toxic products have been allowed into the market under the banner of Islamic finance. The lack of clarity among regulators has allowed unscrupulous managers to mask certain offerings as Islamic, which has tainted the sub-sector’s reputation in recent months.
Chase Bank was placed under receivership in April after special purpose investment vehicles it had classified as Islamic products were contested. READ MORE Jubilee heavy borrowing pushes Kenya’s foreign debt to Sh3.2 trillion National security budget shoots up as war on terror intensifies Kenya: Team picked to address drought in 12 counties When CBK ordered comprehensive audits for lenders after the collapse of Imperial and Dubai banks, Chase Bank’s auditors, Deloitte, demanded that the Islamic assets held in special purpose vehicles (SPVs) be charged for purposes of proper accounting.

The auditors insisted on treating the lender’s Sharia-compliant products as insider loans, and assessed that the SPVs set up to disburse these loans were not assets of the bank, but interest-free loans to directors. Chase Bank was forced to restate its financials, which indicated it had under-reported insider loans by Sh8 billion, casting doubts over its financial health as it reported a surprise Sh743 million loss. Toxic products “Chase Bank was not brought down by Islamic banking products because the facility that the directors had supposedly taken would have qualified as a Qard-Hassan (good loan), or an interest-free loan,” Juma Makomba, the Sharia compliance manager at Takaful Insurance of Africa, said. “A Qard-Hassan is given to somebody who is in distress, but the product they were calling a Qard-Hassan, I think, was Musharakah [joint venture].”

Sheikh Makomba said that under Islamic banking, Musharakah is clear on who the partners are and their activities, as it is more of an activity than financially driven product. “For example, if the directors were buying houses, the houses would have been jointly owned by the bank and directors, and that information would have been available, and those would not be termed toxic products. It is more of a governance issue than an Islamic banking issue,” he said. National Bank of Kenya also registered a Sh1.15 billion loss last year after non-performing loans (NPLs) nearly doubled to Sh11.7 billion in the last quarter of the year.
This was partly blamed on loose lending terms around its Islamic finance product, Amanah. The bank’s board, however, said the lender suffered corporate governance violations that created the loose controls, rather than it misusing Islamic banking principles. Kenya has two fully fledged Islamic banks, Gulf African Bank and First Community Bank; and at least six conventional banks that have Islamic window operations. While banks tend to keep their losses quiet to avoid spooking the public, industry insiders say some of the banks that opened Islamic finance windows did not understand them, which has seen some line managers lose millions of shillings. READ MORE Jubilee heavy borrowing pushes Kenya’s foreign debt to Sh3.2 trillion National security budget shoots up as war on terror intensifies Kenya:
Team picked to address drought in 12 counties “These banks have been operating without any formal guidelines issued by the Central Bank to recognise and govern the peculiarities relating to Islamic banking,” Financial Sector Deepening-Africa (FSD) said in a past report. The Government, through the Treasury, has now stepped in to get the sub-sector to toe the regulatory line by sealing loopholes that have been used to dodge the strict definitions in Islamic finance. FSD has helped the Government establish a Project Management Office that will help police Islamic banks and windows, two credit unions, one Takaful company, one Retakaful window and one Capital Market Unit Trust Fund. Islamic Finance Advisory & Assurance Services, which specialises in Islamic finance, and Simmons & Simmons, an international law firm, have been tasked with setting up a national Sharia Governance Framework to guarantee standards and compliance with provisions of Islamic law.

The Government will then introduce a National Sharia Supervisory Board (NSSB) that will advise regulators on the authenticity of Islamic products from next year. NSSB will also develop a framework to apply audit, tax and regulatory requirements for the products. It will also be mandated to resolve differences in opinions on Islamic finance products.

The Government’s quest to make Kenya a regional Islamic finance hub will require sound legislation that gives confidence to the international markets. “We need a robust framework based on the Kenyan context, and not rely on references from Malaysia, Dubai and Indonesia, which may be good but are not Kenya-specific,” Islamic Finance Project Management Officer Lead Consultant Farrukh Raza said. Largely untapped Islamic finance in Kenya remains largely untapped given the country’s Muslim population, which stands at about 11 per cent of the population, against a 2 per cent penetration of Islamic finance.
“We do not have any product available for Muslim pensioners. We need to leverage technology and mobile phones to get the ordinary Muslim on the street to start saving for pensions,” RBA CEO Edward Odundo said. IRA CEO Sammy Makove added that Kenya was the second African country to offer Takaful insurance, although it was done without any regulation. READ MORE Jubilee heavy borrowing pushes Kenya’s foreign debt to Sh3.2 trillion National security budget shoots up as war on terror intensifies Kenya: Team picked to address drought in 12 counties The local Takaful sector has developed in the last six years after Takaful Insurance of Africa launched in 2011. By the following year, Takaful Insurance had increased its market share from 0.3 per cent to 1 per cent, with gross premiums of Sh428 million, according to FSD.

A number of conventional insurers have established or are in the process of establishing window operations. December 2013 saw the launch of the first Takaful Sacco, Crescent Takaful Sacco Society. The Government is also looking to issue a sukuk, an Islamic bond, which presents a viable source of alternative funding for public infrastructure. Treasury Principal Secretary Kamau Thugge said the Government would consider issuing a sovereign sukuk after the implementation of sector reforms, and added that its size would depend on the country’s needs.

Halal Draft Bill Not Yet Completed In Indonesia
Next Post: Ethanol & Its Halal Status In Food Industries