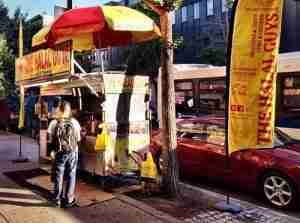 Unlike strongholds in New York and Europe, San Francisco — despite some decent places — still sorely lacks a strong presence in the Middle Eastern, falafel and kebab categories. But that could change if one growing company’s lofty goals come to fruition.

The Halal Guys street cart — creator of what has been dubbed “most perfectly crafted platter of street meat there is” (the standard combo rice-and-meat platter is $6) — has long been a hotspot in Manhattan, right off the corner of 53rd and Sixth. The cart has since expanded to multiple outposts, and this week, the Halal Guys opened its first restaurant.

But that’s not all that the founding Queens duo of Mohamed Abouelenein and Abdelbaset Elsayed have planned for their company. Perhaps more significantly — especially for our West Coast purposes — they have signed a deal with Fransmart to open Halal Guys franchises across the country. (NB: Fransmart is the franchise development company behind brands like Five Guys Burgers, Qdoba and Wolfgang Puck Express.) The Times reported that the goal is 100 nationwide locations in five years, and according to the NY Daily News, the cities immediately in their sights are Los Angeles, Chicago, Washington, D.C., Houston …. and yes, San Francisco.

Halal Guys and Fransmart are bullish on the opportunity; Fransmart CEO Dan Rowe predicted that “it’s going to be the Chipotle of Middle Eastern food” and that “going to be bigger than Five Guys.” Bold words.

Obviously no concrete plans for a possible San Francisco location yet … but the prospect is exciting, yes?