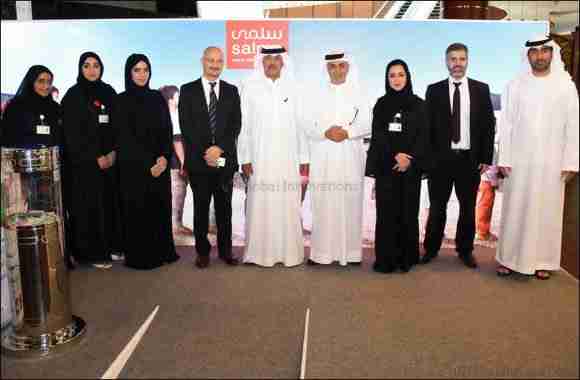 DUBAI: The Salma Humanitarian Relief Programme, an initiative of the Dubai Islamic Economy Development Centre (Died) executed by Awqaf and Minors Affairs Foundation (Amaf), has announced the launch of its annual Ramadan campaign.

In line with the UAE’s pioneering humanitarian role, the Salma program provides halal food relief to victims of wars and natural disasters across the globe. In partnership with Tecom Group, Emirates NBD, Roads and Transport Authority (RTA), Jumeirah, Choithrams, and The Dubai Mall, its seasonal campaign encourages UAE residents to donate and invest in the endowment sector.

Slated to run until after Eid Al Fitr, the campaign will set up a podium, featuring a replica of a refugee camp and an interactive screen projecting a tent city with a line of children waiting for food, at The Dubai Mall to promote the Salma program and collect donations.

Tayeb Al-Rais, Secretary-General of Amaf, said, “As part of its mandate, the Salma program closely monitors the impact of wars and disasters worldwide. Unfortunately, the number of refugees globally continues to surge, with children constituting 51 percent of the total. From 2015 to 2016, more than 73,000 people have become victims of conflicts and natural disasters in the Islamic world.

Furthermore, the UN’s latest data shows that more than 700 million people currently live in areas prone to disasters, with the number expected to reach one billion by 2030. These statistics drive us to expand our aid coverage to new countries.”

He added: “Supporting the displaced people across the globe through providing food aid to those who need it the most, the Salma program clearly testifies that the endowment model is a viable solution to the world’s humanitarian relief needs. In the past three years, the program helped save thousands of lives through supplying more than 455,000 halal meals and distributing 50 tons of meat to people in Palestine, Yemen, Jordan, Sudan, Tajikistan, the Philippines, and countries of West Africa.”

Speaking on the Ramadan campaign, Tayeb Al-Rais said: “I commend Tecom Group, Emirates NBD, RTA, Jumeirah, Choithrams and The Dubai Mall on enabling the Salma team to carry out this outreach campaign and encourage the public to donate for a worthy cause. Our collaboration is part of the UAE’s continued efforts to instill the culture of giving and volunteering in society.”

According to the latest UN reports, 65.3 million people across the globe are currently displaced due to wars and natural disasters, including 21.3 million who are classified as refugees. In addition, conflict forces 34,000 people to flee their homes every day. Given the increasing need for relief for the less fortunate, Amaf works relentlessly to raise awareness about the importance of contributing to the Salma program

Launched in 2014 by His Highness Sheikh Mohammed Bin Rashid Al Maktoum, Vice President and Prime Minister of the UAE and Ruler of Dubai, the Salma Humanitarian Relief Programme follows a concept of the sustainable endowment to ensure a steady supply of meals to those affected by wars and disasters.