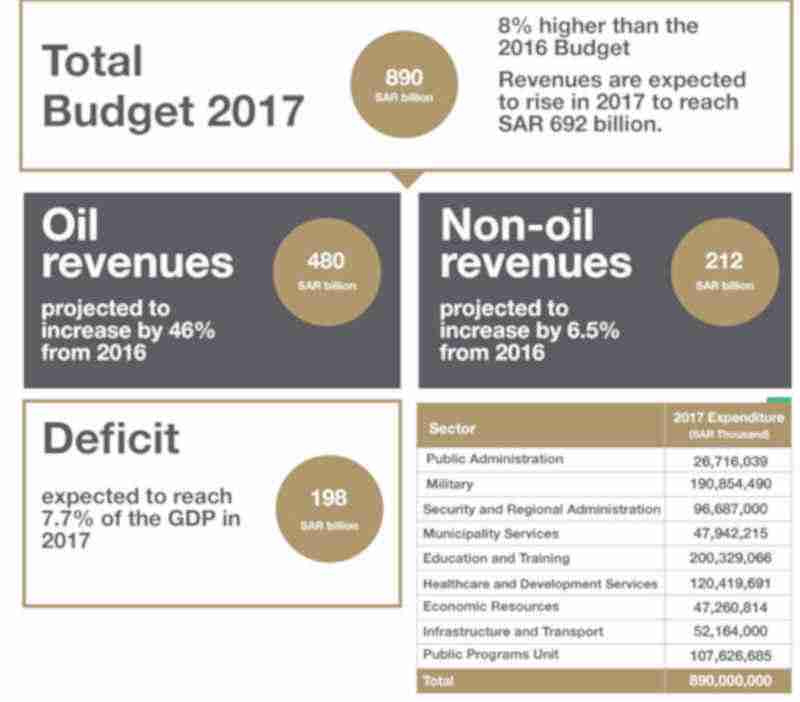 Dubai: Saudi Arabia last week announced its largest-ever budget spending for the year 2018, reinforcing the country’s focus on economic growth while stabilising government finances through augmentation of revenue and continuing with fiscal reforms.

The kingdom’s 2018 budget shows that the government stepped-up spending in the fourth quarter of 2017, and that this somewhat looser fiscal stance will continue in 2018. Together with off-budget spending through the Public Investment Fund and the National Development Fund, the increase in government spending will support GDP growth in 2018, following a contraction in the economy in 2017.

“Fiscal performance in 2017, the planned budget deficit in 2018, as well as the updated medium-term forecasts until 2023 under the new Fiscal Balance Programme are in line with our expectations and therefore do not change our view of Saudi Arabia’s fiscal strength. From a financing perspective, we expect the government will continue to tap international and local capital markets, and draw on its fiscal reserves,” said Steffen Dyck, Vice-President and Senior Credit Officer at Moody’s.

After two years of austerity, officials are shifting attention to growth as they believe austerity drive in past two years has battered economic growth. Saudi Arabia announced that the kingdom witnessed contraction of 0.5 per cent in 2017 and has estimated the real gross domestic product growth of 2.7 per cent for 2018,” Muscat-based Ucapital said in a note.

The government’s ability to increase spending is supported by the higher oil price and the introduction of further reforms, particularly the roll-out of value-added tax (VAT) in 2018.

The Saudi government had indicated that it is likely to push out its balanced budget target to 2023 from 2020, allowing more time to introduce reforms as well as greater government expenditure.

This 2023 target is confirmed in the new five-year economic forecasts, which were included in the 2018 budget for the first time. The outlined spending plans show low single-digit expenditure growth from 2019 to 2023, highlighting the limited space to increase expenditure. Meanwhile, subsidy price reforms (including fuel, gas for industry and utility prices) will be stretched over a longer period, with some adjustments occurring until 2025 to reach international levels.

The 2018 budget envisages a deficit of 195 billion Saudi riyals, virtually unchanged from the original 2017 budget, but about 35 billion riyals (15 per cent) lower than the preliminary deficit for 2017.

The budget projects overall real GDP growth of 2.7 per cent in 2018, driven by a 3.7 per cent increase in the non-oil economy.

While the budget document does not state any oil price assumption, the projected 11.8 per cent increase in oil revenues over the preliminary results for 2017 suggests an implicit oil price assumption of close to $60 per barrel — assuming constant production volumes in line with the Opec+ production freeze and implementation of the energy price reforms in early 2018.

The projected increase in non-oil revenues will mainly come from the strengthening non-oil economy and several revenue measures such as VAT from January 2018, planned expat levy increases, tax on unused land, additional income from the Saudi Electricity Company, and improvements in revenue collection.

Total budget spending will rise to 978 billion riyals. The areas with the largest increases include economic resources — projects and initiatives related to achieving the Vision 2030 goals and mostly concentrated in water treatment and distribution, sanitation, drilling of wells, and renewable energy — followed by health, social and military expenditure.

“The 2018 budget is, on balance, expansionary as the pace of austerity eases further thanks to higher oil prices and more gradual fiscal reforms. However, this is coming at the cost of a higher fiscal break even oil price, and volatile oil prices could dent the hard-won credibility of the fiscal reform programme,” said Jean-Michel Saliba, Mena Economist of Bank of America Merrill Lynch.

“The biggest challenge will be implementation of the reform programme in line with Vision 2030, but it is clear that unlike previous cycles during bouts of low oil prices, this time appears different. Recent actions, such as reduced subsidies, raised municipal fees, various taxations, cuts in government salaries, supportive banking measures, privatisation plans, as well as governmental reshuffles, all signal the seriousness to towards a more sustainable growth model,” Ehsan Khoman, Director and Head of Research for Mena at Mitsubishi UFJ Financial Group.

Strong Funding & Capital Levels To Remain A Source Of Strength For GCC Banks
Next Post: Indonesia Climbs To 4th Place In The Halal Travel Indicator