Separate Cashiers For Non-Muslim Foods At Dubai Supermarkets Set Up 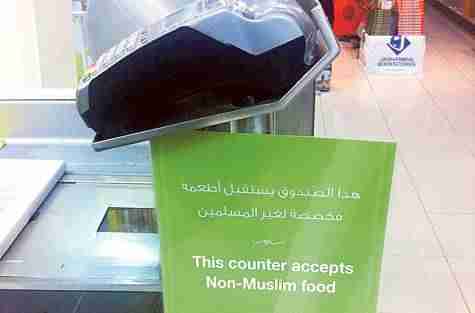 Dubai: People in the UAE should pay for products that are not consumed by Muslims at the designated cashier to abide by the rules set by the Dubai Municipality with respect to others’ beliefs.

Dubai Municipality has asked supermarkets to provide one cashier specifically made for purchasing these foods due to several complaints made by Muslims in the UAE. According to Khalid Mohammad Sharif, CEO of the Food Control Department, this is a form of organisation to avoid customer dissatisfaction.

“The signs put in the supermarkets are to display that products must be segregated since we received many complaints from people who did not think it was right to have the same cashier for non-Muslim foods and other foods,” he said.

Sharif explained that the municipality gave supermarkets options such as setting up a separate cashier inside the pork section of the supermarket or having a designated cashier in the payment area specifically made for non-Muslim products. Another official in the municipality stated that this is a rule that has been implemented for years, however, most people are not aware of its existence.

He also said that the recently added signs set up in supermarkets are not a result of their shortcomings but rather the public’s lack of awareness of the rule. The supermarkets are using signs to direct people to the right cashier and inform them about the rule set by the municipality.

Ahmad Abdullah, a 22-year-old Emirati, told Gulf News that he would not be bothered if non-Muslim products were paid at the same counter, however, it is a good idea to have designated cashiers.

“I personally agree with the rule because when you separate the products you avoid mixing them with other foods which could be a problem for certain people,” he said.

Aya Hamam, a 23-year-old Lebanese, on the other hand, had a different view about the rule. She was not aware of it and said that it is a mindset rather than a religious dilemma.

“This is the first time I have heard about this and to be honest I don’t find it necessary,” she said. “I don’t think it should be taken to that extent, I think it’s a mindset and people are taking it to a new level.”

The municipality clarified that supermarkets have been abiding by rules and that signs are only placed to inform the public. However, according to the municipality official, there are some instances where the supermarkets are expected to meet certain standards in terms of equipment, servicing of equipment, labelling and packaging of pork products.

The pork products, for example, must be tightly sealed, ensuring there are no leaks, and must not be allowed to mix with non-pork items. Fines for falling short of the standards can invite a fine of Dh5,000 or more for a first offence. The penalty can be as high as Dh20,000 for repeated offences, depending on the nature of the violation.

Brahim’s Signs MoU With France’s Servair To Cooperate In Airline Catering Business
Next Post:Zilzar Signs MoU With PIHH To Promote Made In Penang Products and Services