The Rise of “Islamic Chic” And Hijab Haute Couture 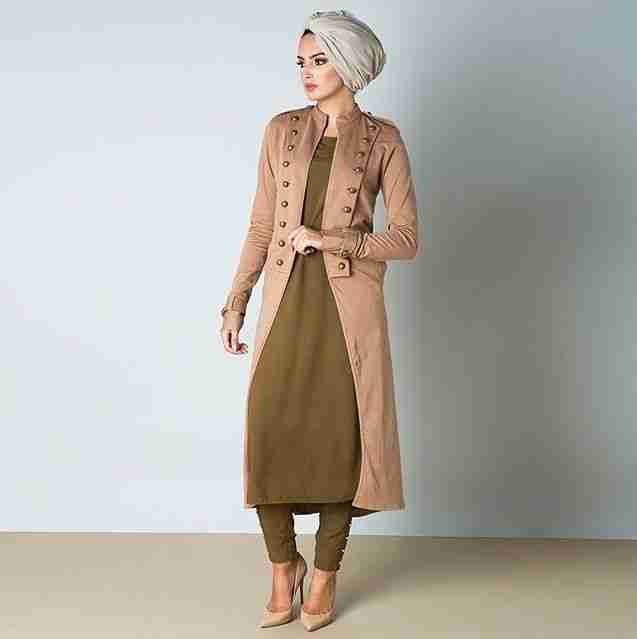 As Islamic fashion is becoming a global industry, plenty is happening on the couture front.

The characteristic scent of Arabic perfumed oils lingers around the entrance of Selfridges, a high-end Central London department store, where abaya-clad women from the Arabian Peninsula can often be seen searching for their latest luxury item in the Louis Vuitton and Gucci boutiques. Fashion-interested and with money to spend, Gulf Arabs also flock to the iconic British shopping mecca Harrods, which was bought by the Qatari royal family in 2010 from Egyptian businessman Mohamed al-Fayed.

“Islamic chic” is a fast-growing market. The State of the Global Islamic Economy 2014-2015 report shows that Muslim consumers spent around $266 billion on clothing globally in 2013. And Thomson Reuters, which co-commissioned the study, estimates that figure will increase to about $484 billion by 2019.

Aab, one of the world’s leading Islamic clothing retailers, opened its first boutique in East London this spring. Complementing its online offering, the physical store opened its doors to a crowd of 2,000 people eagerly awaiting its arrival.

The opening of Aab’s London shop is the first in an international long-term growth strategy that includes expanding to key international fashion and financial hubs in the Middle East, Malaysia, and Indonesia over the next three years. “With the success of our first flagship boutique in London, we plan to open more in the UK and overseas due to the demand for our brand,” says Nazmin Alim, creative director of Aab.

“[With] the population of young Muslims rising, they have [significant] spending power as this is the generation that is now independent, working, and exposed to media in more ways than one,” Alim adds.

As Islamic fashion is becoming a global industry, plenty is also happening on the couture front. The Islamic Fashion Festival, which started in 2006 in Kuala Lumpur, has been held 17 times to date in cities that include New York, London, Jakarta, Dubai, and Singapore. Names like Sydney-based Frida Deguise, Rabia Z, and young trend-aware Muslim fashion lovers, dubbed “hijabistas,” are leading a modest fashion revolution with their own brands, garnering hundreds of thousands of followers on social media in the process.

“The new younger generation wants to be modern without compromising on their halal lifestyle,” says Salma Chaudhry of The Halal Cosmetics Company, which launched in 2013. “We’re in a society where any and all information is at our fingertips, ladies are chatting and sharing information on social media particularly about topics like beauty and fashion all the time.”

Chaudhry, who will be speaking about her cosmetics range in Saudi Arabia, France, and Azerbaijan this year, predicts both the Islamic fashion and beauty industries are on the cusp of something big.

“Muslims of this generation are embracing their identity, and businesses that do not cater to this huge consumer sector will be left behind. I think that halal cosmetics will be as readily available as any other type of beauty product pretty soon. The industry is still in its infancy and the future is about to boom,” she says.

Iman Aldebe is a Stockholm-based fashion designer who focuses on quirky turban interpretations as an alternative way of wearing the hijab. Raised in a religious Muslim family from Jordan—“I hated my mother’s baggy and shapeless clothes,” she says—Aldebe studied design at high school and started creating dresses for friends’ graduations and weddings at an early age.

The daughter of a religious leader and politician in Sweden, Aldebe’s groundbreaking quest to modernize Muslim fashion provoked the conservative views of Islamist and right-wing extremists alike. “If you are paving the way for something new, you can count with a certain resistance,” she says. Each one of her trendy pieces is hand-made. Her collections are sold in exclusive galleries in Sweden, Paris, and Dubai. “I’m always at the forefront because I’ve worked with Muslim fashion during a large part of my upbringing. It used to be men designing women’s clothes but now women have taken over,” she says.

When one of Aldebe’s female friends attended Polishögskolan (Police College) in Sweden and needed a suitable hijab, Aldebe was commissioned to create the hijab that now forms part of the official Swedish police uniform. The task, complicated by security considerations, resulted in is a sleek, stylish, yet highly functional hijab that seamlessly blends with the required headgear. So far, just one Swedish police officer wears it for work. But Aldebe will soon be creating an official military hijab for the Swedish army (in camouflage), as well as another for women working in pharmacies and hospitals.

Aldebe is currently working on her first Islamic clothing line for both men and women for the Arabian Peninsula, particularly Riyadh and Dubai. Combining Swedish style with long, traditional garments, her norm-breaking collection is all-white for both sexes, challenging the Gulf norm that women should wear black and men white. The white collection aims to strengthen women’s role in society and promote equality. “Sometimes, clothes have a larger impact than politics,” she says.

Making art out of fashion, Aldebe says, has always been a tool for her to try to eliminate prejudices and open up the eyes of the fashion world to other cultures and religious influences. “I want to show the emergence of strong, individualistic, intelligent, independent and driven women with a different background from the Swedish one, and that is Muslim,” she explains. “I’ve wanted to eradicate the image of the oppressed Muslim woman that voluntarily isolates herself from society to live on welfare and produce babies.”

“Since I’m not confined to a certain norm, it’s been easier for me to think outside of the box and to create something modern, particularly after the Arab Spring,” she continues. But she has stuck with the wealthy region’s penchant for silk, pearls, and Swarovski crystals, which features heavily in her newest designs. The United Arab Emirates (UAE) is the second-largest consumer of Muslim clothing in the world, spending $22.5 billion in 2013. In first place is Turkey, with $39.3 billion spent on the merchandise in the same year. “When I was asked to change UAE’s traditional outfits, I discovered that the men’s traditional garments have remained the same for centuries. But colored female abayas are now slowly being accepted,” Aldebe says.

Anas Sillwood, manager of Jordan-based Islamic clothing company Shukr, points out that most women, however, don’t wear haute couture. “The majority of Muslim women wouldn’t wear turbans. But Muslim women are looking for nice evening gowns to wear to special occasions,” he says. “At Shukr, we’re trying to meet some really pressing needs in the Muslim community.”

“Shukr’s sales are highest in the summer months because Muslims can’t find mainstream alternatives. In the winter months, sales slow down because the clothes become more modest in mainstream stores,” says Sillwood.

“Ideally, Muslims have a very balanced approach towards clothing—they want to look presentable and beautiful, but they don’t become obsessed with it, or with the latest fashion,” he adds.

The term “Muslim Cool” relating to fashion was coined by ethnologist Leila Karin Österlind in her doctoral thesis on Muslim fashion that has the working title, “Next Year in Dubai Incha Allah. Islamic Fashion and Muslim Cool.” The concept works in two ways: It includes how trendy hijabistas like Instagram star Mariam Moufid and fashion blogger Dina Tokio dress, as well as the way in which Muslim fashion affects mainstream Western brands—for example, H&M’s offering of harem trousers and Moroccan-style kaftans in its collections.

While valid as a description of previous trends, both “Muslim Cool” and “Mipsterz” are now dated terms according to Aldebe—as is “Muslim fashion” itself. She says that Islamic-inspired fashions are becoming more and more mainstream.Österlind points to how this has also infiltrated wider male fashion: The now-infamous hipster beard, the height of its popularity occurring a few years ago and much-spotted in capital cities worldwide, was originally an expression of Muslim Cool.

According to Österlind, there are mainly two trends that are taking over the global Muslim fashion scene: tight outfits combined with wraps or turbans and Khaleeji-influenced (Gulf style) abayas, and large, built-up hijabs. “Being a Muslim today is increasingly connected to consumption,” Österlind told Swedish newspaper DN in April.

“The pressure for fashion profiles and celebrities to always be the first to deliver inspiring looks has contributed to an increased acceptance of the unknown. Trends shift so quickly today, so people are happy to get inspired from other cultures and religions,” she says.

Sillwood believes Islamic international fashion companies will emerge to compete in the fashion industry. He says that Turkish companies, while much bigger than Western Islamic clothing companies, are heavily influenced by Turkish fashion, which is not appreciated everywhere, and they are unlikely to become major international brands.

“Overall, the Islamic fashion industry will become more and more similar to the mainstream fashion industry—in terms of presentation and style of clothing. Because of the globalization of Western mono-culture, it is probably Western Islamic clothing companies that have the greatest chance of becoming major international fashion companies,” he says.