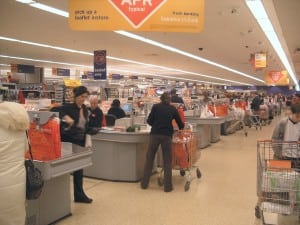 The announcement Tesco and Sainsbury’s are stepping up their Halal meat offerings with new branded fixtures in store reinforces the importance and potential of ethnic shoppers to both suppliers and retailers.
Category and shopper management specialist Bridgethorne says suppliers need broader recognition of changing demographic circumstances, coupled with more detailed shopper insights, are needed to ensure they stay on top of changing shopper requirements. These include those based on ethnicity or special dietary requirements, leveraging a trend among younger groups within ethnic minorities to shop for products in mainstream multiples rather than purely in small, independent community-based retailers.
Both Tesco and Sainbury’s carry the Shazam brand of fresh chicken, lamb and beef as well as related products like kebabs and sausages and specialist fixtures now feature in 250 Tesco stores and 130 Sainsbury’s stores.
Citing a report by EBLEX, the organisation for beef and lamb levy payers in England, Bridgethorne co-founder John Nevens says suppliers need to be aware of changing buying behaviour among UK shoppers. “The Muslim community in the UK is estimated at around 2 million people – about 3% of the population, yet the EBLEX report shows Muslims account for about 20% of lamb consumption and a small but increasing amount of beef. The Halal meat market therefore is a multi-million pound contributor to the British economy, much of which is still driven through community butchers.”
The report shows food shopping in the community is split between the major multiples and discounters for mainstream goods and specialist ethnic outlets for ethnic foods and Halal meat.
However, with multiples recognising the potential size of the market, more shoppers are likely to begin routinely buying Halal meat as part of their overall weekly shop. “However,” says Nevens, “there is a new generation of young, middle-class Muslim consumers demanding high quality and varied Halal food. They want more choice and independence and they expect to be able to buy what they need as part of their overall food shop.” Opinion: Multiples’ drive into Halal meat market shows growing importance of ethnic shoppers
This is an example, says Nevens, of a power shift away from major brands and suppliers, through the retail multiples to the shopper. Suppliers need to understand that and use it to inform their business models, from marketing and activation to new product development.

“Consumers and shoppers are not one and the same. The Halal meat shopper will be influenced by their families – the consumers – but they are the ones who will ultimately make the purchasing decision. If they can save time and money by buying Halal meat as part of their overall shop, many will. Understanding what drives the shopper, the missions they take when they buy and the factors that influence their purchasing decisions of Halal meat or any other product is vital.”

Nevens adds that, if suppliers are only focusing on consumers or retailers’ customers and not concentrating on their shoppers – the bridge that links the two – then they cannot be certain they are reaching the right people, with the right message and at the right time and place. And this means that their activation activity and the way their budget is being spent must be less than optimal.
Originally published on halalfocus.net