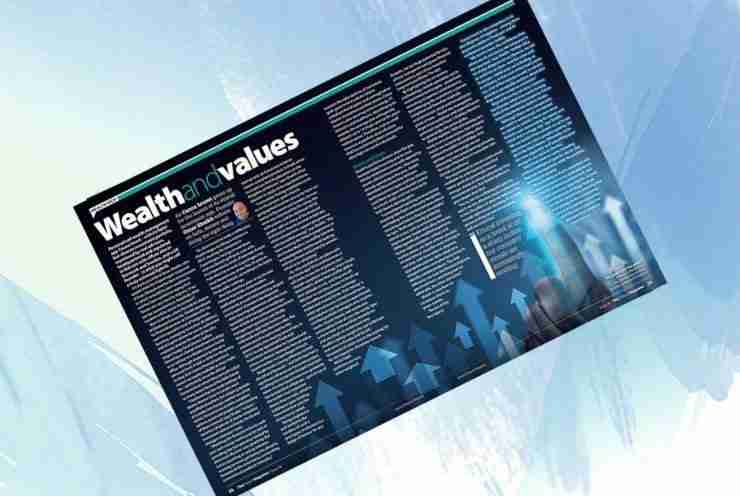 Personalized wealth management app Cocoa Invest – with its halal but diverse investment portfolio, monitored by real advisors, headquartered and regulated in Bahrain with offices also in Denmark and Sweden, and a UK founder – is what you might call a truly universal hybrid.

It’s the brainchild of Omar Shaikh, who upped sticks for Copenhagen in pursuit of love, lifestyle, and the best environment in which to build his own wealth tech, and has been quoted as saying that: “Danes are very hard to impress. If we can be successful here, hopefully, other markets will be easier to conquer!”.

Born in Britain, where he took his degree at Edinburgh University, Shaikh developed his financial acumen at Schroders PLC (as part of a specialist fund of hedge funds business, managing more than $6.6billion), and at Capita (where he was an authorized corporate director for some of the UK’s largest hedge fund clients), before focussing on shariah investment strategy as an advisor to a Middle-Eastern family office.

Although important to him on a personal level, it took a while for the penny to drop that Islamic financial solutions weren’t as readily available as they might be-particularly since the ethical framework on which they are built ticked so many boxes beyond the faith-based.

“I believed that the small rustlings of Islamic finance I saw in London were amplified elsewhere, but stepping outside of London into Europe and the rest of the world, I found access to faith-compliant options scarce and people’s understanding of the nominal,” says Shaikh. “In fact, I became a dispenser of sharia-compliant investment advice to friends, family, and strangers wherever I went.

“Watching the financial industry walk past such a large market just for lack of providing the transparency needed by observant Muslims was upsetting. But not as upsetting as seeing investors wanting to invest yet being too afraid to because of the uncertainty surrounding conventional products’ ethicality.”

As Cocoa Invest gears up for the launch of its ethical investment app, Founder Omar Shaikh reflects on faith, money, and doing the right thing.

So, determined to make a difference, Shaikh began building a solution in 2015, locating his company in Copenhagen, having moved there with his Danish girlfriend, now wife. A comparatively small, if talented, fintech hub when he arrived, Copenhagen has since become one of the Top 20 cities in Europe for fintech, according to the latest Findexable rankings.

Over the next four years or so, his core mission to provide a truly modern application that removed barriers and uncertainty around halal investing, shaped every aspect of product development – from securing agreements with the most reputable fund managers to building a team of both active and passive investment management specialists and, finally, designing an app to be intuitive to millennials and baby boomers alike.

The passion and drive generated by this process led to him wearing several hats. In 2017, he was appointed Trade and Investment Ambassador for Scotland with a focus on fintech, having by then served as a board member to Copenhagen Fintech.

Shaikh holds a strong affiliation to both the UK and Denmark – and both have had a significant influence on his current project, enabling him to tap into Europe’s best tech talent. It’s why Cocoa Invest was spotted by the Central Bank of Bahrain – part of one of the world’s most important Islamic finance hubs, which is building an open banking framework that suits the Cocoa Invest model.

“Being singled out and invited to the sandbox of such a prestigious institution is a badge of honor for any startup and, as Cocoa was to be an Islamic compliant product, it made sense to create our first headquarters in the Kingdom of Bahrain,” says Shaikh of his decision to apply to be regulated there. “I remember feeling trepidation early

on in the project, given that its geographical location was so far from our teams in Denmark and Sweden, but we were very impressed by the setup, the enthusiasm, and the balanced 50/50 gender split on many of the financial institutions’ boards present in Bahrain, which infused their support program with incredible energy,” says Shaikh.

“The team running the fintech program at the Central Bank is incredibly talented, knowledgeable and forward-looking, and run almost exclusively by women, which is so refreshing.”

So, why was Bahrain so taken with the Cocoa app? First and foremost, it will make it easy for anyone to start shariah-compliant investing. Users simply download it, define their profile, define their attitude to risk, and they are off. Whether or not they choose to brush up on the difference between exchange-traded and mutual funds, their money is safely spread across vetted investments and watched over by Cocoa’s experienced, certified portfolio managers who monitor stocks, Islamic bonds, real estate, and commodities from all over the world.

Take a closer look at its portfolio breakdown and you begin to understand why Shaikh’s startup caught the eye of Bahrain and users in Europe and the UK – thousands of whom are on the waiting list for the hoped-for December launch.

While halal portfolios are very often weighted towards the safer options of real estate, gold, government sukuks (sharia-compliant bond types), and unimaginative Islamic investment certified stocks, Cocoa Invest is also securing some in energy, IT, telecoms, and healthcare. According to its website, the average plan will typically allocate up to 12.54 percent to the year’s hottest sector. Therefore, it gives small investors a portfolio diversification that has customarily been reserved for ultra-high net worth individuals.

Shaikh’s portfolio choices close the gap between halal investing and its most closely related and universally appealing cousin, ethical investments. Like many already operating in the area, Shaikh identified the similarities between both investment types and has cleverly used them to open the shariah market to a much wider, and not necessarily faith-based, demographic.

Both of their concepts of what ethics stood for were evolving in real-time, with innovation to dispense appropriate policies. Both relied on a stringent review and selection process to identify suitable products. The only difference was how the financial industry perceived them, one being seen as admirable, the other restrictive.”

Shaikh is now keen to introduce clients to green sukuks. “As one of the few Islamic fintech, we see huge potential for this ethical, transparent, and green financial instrument as part of our investors’ long-term portfolios,” he says.

By highlighting the scrupulous methodology shariah specialists use to screen investment targets – proactively reviewing companies’ commitment to benefitting the world from a shariah-compliant and therefore implicitly environmental, social and humanitarian point of view – Shaikh has managed to dispel misconceptions and expand Cocoa’s potential market from 1.8 billion Muslims too, potentially, the entire globe.

Shaikh explains: “Ethical investing, as a trend, is on a sharp incline, but company morals are increasingly eroding, often without the public’s knowledge. And, perhaps more worryingly, we are witnessing more greenwashing of bonds. This type of behavior is impossible with shariah compliance.”

The requirement to remain continuously certifiable by a third party means that Islamic products potentially have a stronger stamp of ethical authenticity than conventional ones. But Shaikh believes it goes deeper than that.

“For us, we are certifying principles by which we live. Whether stocks make money or not, the pillars of what we believe to be morally right remain standing. It’s a really personal thing we owe to ourselves and our customers.

“Ethical investing, as a trend, is on a sharp incline but company morals are increasingly eroding.”

Cocoa Invest is also scrupulous in its due diligence of suppliers among them payments platform TrueLayer and ID verification provider Onfido.

“We need to have the confidence that, where we do outsource, we outsource to the very best,” says Shaikh. “Onfido did a lot of due diligence on us; likewise, we did an awful lot on them. And the same with TrueLayer. I think what we’re finding, as an industry, is that a lot of the heat’s come out, a lot of the naivety as well, so service providers are equally cautious about who

they want to accept as customers.” Beyond these key services, however, this founder otherwise wants to keep hold of the intellectual property: Cocoa Invest’s backend was built in-house.

“Although there were components we could’ve outsourced, we wanted to remain in control. I have seen some fintech over-outsourcing for speed, and I think that is a huge risk,” says Shaikh. “We can build it from scratch, so we’re not dependent on other people’s systems. We don’t like black boxes. Ultimately, we’re the ones regulated, so if something goes wrong it’s our neck on the line.”

There’s lots more to come, including artificial Intelligence tools for day-to-day financial management, while the portfolio. continues to expand.

“We’re looking at sharia-compliant real estate investment trusts, probably based on a Nordic underlying investment and Islamic pensions,” says Shaikh, “as well as a whole host of things that we can do for consumers, knowing that everything we do is completely ethical and shariah-compliant and that we’ve sourced the absolute best products and services.”