On June 6, 2021, it approved the Sovereign Bond Bill to allow Egypt to offer the country’s first Sukuk bonds. According to Egypt’s finance minister, the value of its first Sukuk bonds can be up to $2 billion. The Egyptian government is preparing to capitalize on the growing Sukuk bonds market to add to its portfolio of federal securities. The Sukuk bond market has been a lucrative avenue to raise capital for other countries such as Dubai and Malaysia.

After the Sovereign Bill was passed, the next day Egypt’s Minister of Finance, Mohamed Maait, stated in an Egyptian Ministry of Finance press release, that the GDP of the Egyptian economy is forecasted to mount up to EGP 6.4 trillion (the Arab Republic of Egypt, Ministry of Finance 2021).

Maait further mentioned that the current success of Egypt’s current economic situation is due in part to increasing the term of public debt, improving the yield curve, and increasing foreign investors’ participation in the government’s financial tools. The ministry views the selling of Sukuk bonds as an effective means to raise capital by increasing foreign investment in the government. This plan has been conceived in part due to the Sukuk bonds global market’s performance.

What are Sukuk Bonds?

Currently, investors interested in Islamic compliant securities are not only Muslims but also a growing number of non-Muslims according to S&P Global. Recently, at the end of the first quarter of 2021, Fitch Ratings scored global Sukuk bonds with 80.7% of Sukuk bonds being investment grade, while 19.3% is considered speculative from the total market worth of “$119.1 billion at end of 1Q21” (Al Natoor, 2021, para 2). 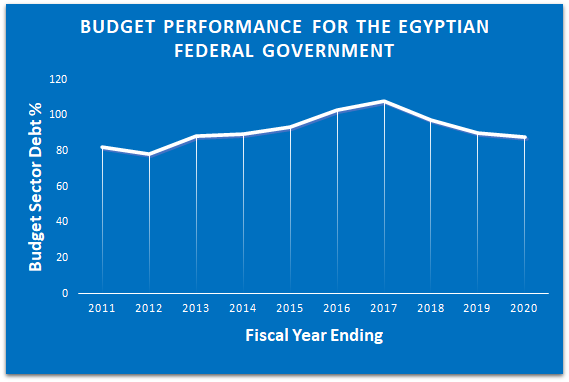 *Data sourced from the Arab Republic of Egypt, Ministry of Finance

Noticing such trends, the Egyptian Government seeks to capitalize on issuing Sukuk bonds by operating a government-owned corporation to act as an agent for Sukuk bondholders, according to Maait. Maait also noted that the time ceiling of the right to use the state-owned assets, under Sukuk bonds, is 30 years with the availability of re-letting the assets.

One goal of the Egyptian Finance Ministry is to issue Sukuk bonds to diversify the demographic of investors seeking to invest in Egypt’s financial securities. Aside from this, an underlying goal of the Egyptian Ministry of Finance is to decrease Egypt’s budget deficit. From 2012 to 2017 end of the fiscal year, Egypt has seen a steady increase in budget sector debt (see graph below).

Although the budget sector debt has been steadily decreasing over the past three years, the Egyptian Finance Ministry has decided to implement the Sukuk bonds initiative to secure the overall economic health of the country.

Approval of the Sovereign Bill may not come as a surprise to investors in Egyptian federal securities, as the Sukuk market displayed some of the best performance of all global fixed income asset classes over the past five years. Recently, the Dow Jones Sukuk Total Return Index had a five-year risk-adjusted return of more than triple that of the S&P Global Developed Aggregate Ex-Collateralized Bond Index (Giodarno 2020).

Currently, Egypt is still drafting the framework to manage the issuing of Sukuk bonds. In another press release from the Egyptian Ministry of Finance on June,7, Matt stated that despite the corona crisis, “the government achieved a positive growth and primary surplus, and succeeded in reducing the total deficit” (the Arab Republic of Egypt, Ministry of Finance, 2021, para 9).

Maait also stated that the result of recent appraisals of Egypt’s economic performance from international institutions will positively affect Egypt’s investment climate. If this is true, then perhaps the Egyptian economy can benefit from the issuing of Sukuk bonds.

The author is working as the CEO of CERULEAN LABS LLC, a Washington D.C.-based company.