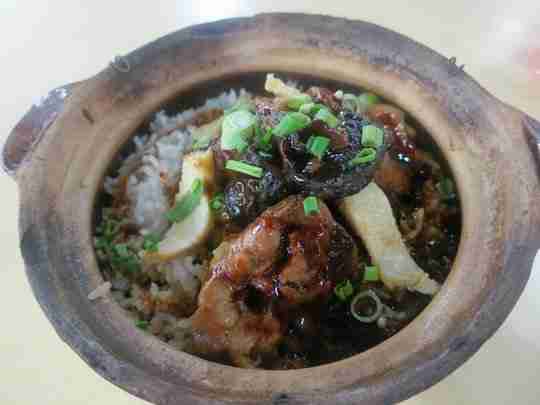 Normally, we would avoid Mid Valley Megamall in Kuala Lumpur at all costs but have been told that they had increased parking spaces, we braved ourselves for the hunt and crowd.

The Oasis Food Court, located across from the AEON department store is decent-sized and the Sizzling & Claypot stall is partially hidden behind the drinks counter.

The claypot chicken rice mushroom and salted fish (RM6.90) definitely did not disappoint — the sauce is quite nice and rich but not too salty and is tinged with a gingery aroma.

The salted fish is soft and adds another depth of flavor to the rice and chicken combination. Other dishes to give a try include the claypot BBQ chicken and claypot tomyam meehoon.

Sizzles staff waiting on a customer at Signatures food court in KLCC. — Pic courtesy of Hungry Go Where, September 29, 2014.KLCC has two food courts and Signatures on the second-floor houses Sizzles which has the priciest claypot chicken rice in town.

A regular claypot chicken rice mushroom is RM8.50 and if you want salted fish, be prepared to part with an additional RM1.00 for a tiny morsel.

However, the dish comes with generous amounts of chicken, almost as much as the rice. Taste-wise, the well-marinated chicken is tender and juicy, and the gravy is tasty.

Our dish came almost instantaneously while we were still fumbling with our change. The sauce is a black gooey consistency and doesn’t look like much but it is surprisingly good.

Eat this with the pickled green chili and chili paid for an extra bite and make your tastebuds sing and zing.

Ikan masin injected a burst of flavors into an otherwise average claypot chicken rice. — Pic courtesy of Hungry Go Where, September 29, 2014. The steamed mushroom chicken rice bowls (RM14.90) at Old Town White Coffee outlets come pretty close to a claypot chicken rice, with the exception that the rice is, obviously, steamed and not cooked over a blazing fire.

The dish comes served in a neat, round pot that has a stainless steel lining, ensuring that the rice remains warm and fluffy.

The rice was tasty enough but the steamed chicken pieces were a tad under-seasoned. That was until we added salted fish (RM1.90), which when shredded and mixed well with the rice, resulted in an aromatic and absolutely satisfying dish.

The salted fish really brought out the subtle seasoning of the rice and chicken, so we definitely recommend that you add it on whenever ordering this rice bowl. — September 29, 2014.