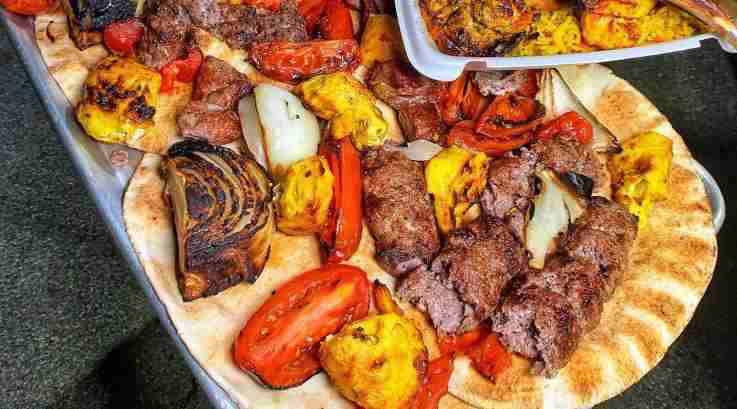 Born and raised in Dearborn, Abraham Obeid is taking over the metro Detroit area with his halal food reviews. Abe’s food reviews started as just for fun. He had a passion for food and he wanted to share that with his friends. As Abe began gaining followers on his Instagram page, he realized that his food reviews were far more about the food itself, but rather about supporting and bringing together the Arab and Muslim communities. Today, many people now know Abe as “Halal Food Junkie.”

For many Muslims living in America, finding halal food is a challenge. Dearborn is unique in that it offers an abundance of halal food restaurants and markets to cater to its large Muslim population. Many Muslims from across the state of Michigan, and the country, travel to Dearborn just to get a taste of the diverse halal food options that Dearborn has to offer and may be difficult to find in their hometown.

With the large and diverse halal food options in Dearborn, Abe decided to use that to his advantage and take on a project that supports halal food businesses and draws more people in from across the country to learn about halal food and the Dearborn community.

Abe’s goal is to continue to be the main guide to halal food in not just metro Detroit, but across the country.

Abe wants his Dearborn community to know that he will not be where he is today without them, and he expressed that a great deal during his interview with Arab America.

When and How did Halal Food Junkie Start

Abe began Halal Food Junkie in 2017. At the time, Abe was having some family issues so his mom wasn’t cooking much at home. This led Abe to eat out a lot with his friends until one day he got the idea to start an Instagram page that he would call “Dearborn Food Junkie.”

“I went to Burger Shack, I will never forget it, my first ever post of food. It was the western barbeque burger… and that was it. I told everyone that my name was Dearborn Food Junkie”

Abe began posting on his page every three to four days.

When Abe started Dearborn Food Junkie, he didn’t know what he was doing. He was a big fan of food and wanted to do something fun; however, with some advice from a friend, Abe decided to take a risk and make his page into his profession. Abe noticed that no one was doing what he was doing. There was no social media influencer that showcased or supported halal food. That’s when he decided to change his Instagram page to “Halal Food Junkie.” The concept behind his Instagram page was to be a halal food guide for Muslims not just in Dearborn, but across the state and the country.

Halal Food Junkie Across the Country

Abe mainly showcases halal food in the metro Detroit area because that’s where he lives, but doing food tours across the country is what helps Abe showcase halal food in other states. So far Abe has been to Los Angeles, Chicago, and most recently Pennsylvania.

Abe had his own Chicago food tour where he showcased 19 restaurants in three days. Bridgeview, Illinois, is known as “Little Palestine” because of its large Palestinian population. It is similar to Dearborn in that its population is predominantly Arab and has many Middle Eastern restaurants and bakeries around the area. While on his tour in Bridgeview, Abe featured al-Bawadi restaurant, the most well-known Middle Eastern restaurant in Illinois, and the Nut House, which was originally founded in Jordan in 1953 and is known for its Middle Eastern Nuts, coffee, sweets, seeds, and spices.

In L.A., Abe went to 786 Degrees Pizza, an Italian kitchen that serves 100% halal food. 786 Degrees Pizza is owned by Ali Haider, an Indian/Iraqi Muslim, and his pizza was voted best Italian Pizza in the US when he competed in the Midwest U.S. Pizza Cup. Abe also visited Anwar’s Kitchen. Anwar is owned by Anwar Jibawi, a Palestinian American who is known for his social media platforms and recently opened a halal food restaurant in L.A.’s fashion district.

By doing food tours, Abe can grow his Instagram page and support Arab/Muslim businesses around the country. Abe also wants Muslim Americans to know that there is a diverse selection of halal food in the US. Muslim Americans often struggle to find halal food restaurants to eat at, but with Abe’s Instagram page, Muslims can have a look at their options. The number of restaurants serving halal food in the US is growing as well. Abe once went to a restaurant that does not sell halal food, but on that specific day, the owner of the restaurant made halal food just for Abe. Abe told the owner that his recipe was really good and that encouraged the owner to start selling halal food. That is a prime example of how Abe is supporting the Muslim community.

One of Abe’s goals is to do tours in Dearborn. Dearborn is becoming the capital of food in the US. Dearborn is a growing food hub, especially among the Arab American community. His goal is to take those who have never been to Dearborn on a bus and show them around the city of Dearborn. He once collaborated with a class at the University of Michigan, Ann Arbor, and took students to Dearborn. He took them to the Islamic Center of America, Shatila, and the Qhawa House. Abe hopes to continue doing similar tours in the future.

On top of showcasing halal food, Abe has done a variety of charity work to give back to his community. He worked with Oday Aboushi, a Palestinian American football player to give out jerseys and football tickets to make money that they would give to Zaman International. A non-profit that facilitates change to marginalized women and children. Abe also did charity work by collaborating with Local 4 to support a GoFundMe page to give back to Lebanon. By working with Local 4, Abe raised $15,000. During COVID, Abe worked with the Islamic Institute of America and got about 30 restaurants involved to give out free meals to people who were suffering from the pandemic. Giving back to his community is a big part of Abe’s page.

Abe’s goal is to grow his page on a national level. Arab America looks forward to watching Halal Food Junkie grow into the biggest halal food guide in the US. Be sure to check out the Halal Food Junkies Instagram page and try out some of the local halal food spots near you.

Facts about the Hala Food Junkie, in his own words

•My favorite homemade food is the Middle Eastern dish: Mlukhieh! Also called Jews Mallow, it’s a cooked green made with a bunch of aromatic ingredients and spices and served with a side of white rice!
•Top choice for eating out is either pizza or a really good chicken burger!
•The things I value most in life are my close family members, friends, and God.
•It’s very important for me to take time out of my to reflect on myself and my decisions and plan how I can become better in all aspects of my life!
•My twin brother, Acky, was born with a cognitive disability but plays a huge role in my life. I love him more than anything and he inspires me on a daily!
•I value my connection with God greatly, but I’m also a lover of life and work hard to keep a good balance between the two.
•Meeting and connecting with people from different backgrounds and cultures is important because it adds value to who I am and what I do.