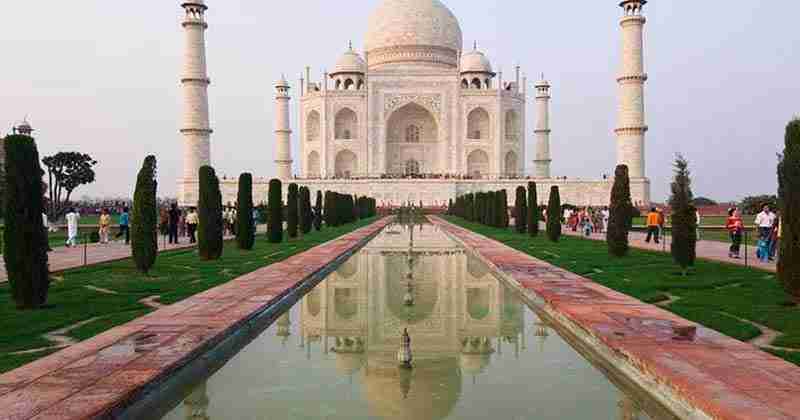 Indian Government Sidelines Taj Mahal for its Islamic Past


NEW DELHI: The government of the Indian state of Uttar Pradesh (UP) has come under fire for omitting the Taj Mahal from its annual tourism brochure, released on Oct. 2.
The stunning white marble mausoleum, commissioned by Mughal Emperor Shah Jahan for his wife Mumtaz Mahal, is widely considered one of the seven wonders of the world and attracts millions of visitors annually. But the Bharatiya Janata Party (BJP) — the country’s largest political party, which leads the UP government under Hindu nationalist Chief Minister Yogi Adityanath — has stated that “the Taj Mahal and other minarets do not reflect Indian culture.”
The 32-page booklet recently released by the UP Ministry of Tourism neglects to mention the UNESCO World Heritage Site at all, instead giving prominence to sites of significance to the Hindu religion.
Sanjay Jha, a spokesperson for the opposition Congress party, told Arab News, “This is symptomatic of a deeper ideological mindset. It is the manifestation of BJP’s resentment toward India’s history. The fact that Indian history has a significant Mughal presence is disturbing to those who are wedded to extremist Hindu ideology.”
“According to the BJP and its paternal organization, the Rashtriya Swayamsevak Sangh (RSS), Muslims in India are foreigners,” historian D.N. Jha said, adding that he believes Adityanath and the BJP are “undermining the Islamic heritage of India.”
Certainly, they seem intent on promoting Hindu culture and history. A few months back, Adityanath pointed out that when Prime Minister Narendra Modi goes on an official state visit, or receives foreign dignitaries at home, he presents the Bhagavad Gita or the Ramayana — both major Hindu texts — as a gift.
Rajeev Saxena, the president of the Tourism Guild of Agra, described the omission of the Taj Mahal from the tourism brochure as “immature and foolish,” adding that the site “doesn’t belong to UP and India — they are just custodians.”
Saxena told Arab News, “The government is attacking the tourism economy and violating the mandate of the people.”
Sanjay Sharma, president of the Tourist Guide Federation of India, agreed. “A monument which is part of the bread and butter for not only the people of Agra but for millions of people in UP… how could the government think of ignoring it?” Sharma said. “Fanaticism has blinded the government.”
Avanish Awasthi, the UP government’s secretary of tourism, argued that “adding Hindu sites to the brochure does not mean the Taj is being ignored.”
He pointed out that the government is developing areas around the site and has increased the budget for the upkeep of the monument itself.
“The booklet is not a guide to tourism,” he said. “It is just information about new places.”