Is The Food Still Available In Palestine? 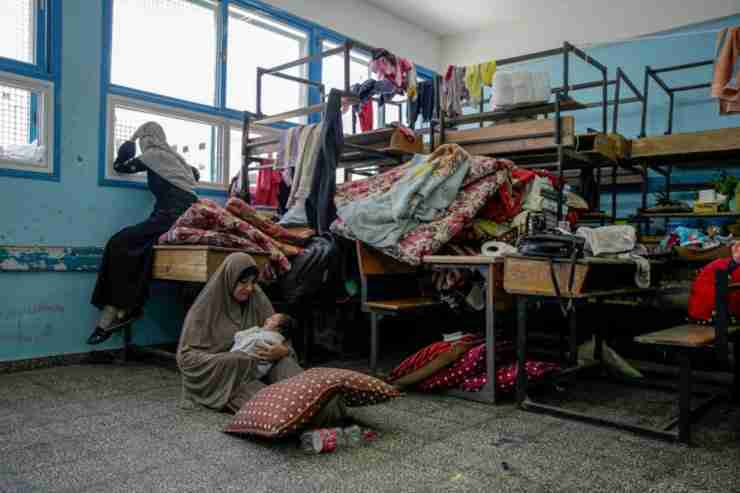 Yes, the food is still available in Occupied Palestine. However, the supplies are running short due to the closure of border crossings and the bombardment of Israeli forces on the Gaza strip.  The situation may improve due to the ceasefire between Israel and Hamas. However, the recent carnage of Palestinians will have a long-term impact on the economy of the occupied territory.

The following article on Aljazeera describes the precarious situation in Gaza and the impact of the recent bombardment by the Israeli forces on the lives of the Palestinian residents.

UN says some 58,000 Palestinians have been internally displaced in Gaza as Israel continues its intense bombardment of the territory.

Cradling her newborn baby Hasan on the floor of a classroom in Gaza City, her five other children flitting in and out, Suheir al-Arbeed lists the necessities they are lacking.

“We need food, clothes, duvets, mattresses, and milk,” al-Arbeed, who gave birth two weeks ago, told Al Jazeera in a phone interview. “My back hurts from sleeping on a thin cover on the floor.”

“I have to ask other people for diapers for my son,” she added. “I’m trying to breastfeed him but he’s still hungry and keeps crying.”

The 30-year-old was among one of the hundreds of families living in Gaza’s north and east who fled their homes overnight on Thursday, as heavy Israeli artillery shelling and aerial bombardment shook the ground under their feet.The families escaped on foot and hurried in the dark for several kilometers to the Gaza al-Jadeeda school, one of many run by the UNRWA, the UN agency for Palestinian refugees.

“There were no cars or transportation available,” al-Arbeed said, whose home is in the Shujaiyah area in Gaza’s northeast.

For Umm Jamal al-Attar, it is not the first time she and her family have been displaced. She told Al Jazeera that she spent 40 days sheltering in a school during the 2014 Gaza war, in which Israel killed more than 2,100 Palestinians, including 1,462 civilians over a span of 51 days.

Umm Jamal, her husband, and five children ran out of their house in Atatra, in the northern town of Beit Lahia, after a neighboring house was targeted by an Israeli missile.

The attack killed Lamya al-Attar and her three children – Amir, Islam, and Mohammed – who were living in an apartment on the second floor.

“The Israelis were bombarding us with missiles and shelling. They also fired some sort of gas,” Umm Jamal said, adding that she has not been able to return home to get clothes or food.

“Our children need to be distracted with toys or anything that will take their minds off the bombing and the fear they’ve been living in,” she said. “The bombing is all they talk of now.”

Israel’s bombardment of the besieged Gaza Strip, now in its second week, has killed at least 213 Palestinians, including 61 children and 36 women, according to Gaza health authorities. More than 1,300 others have been wounded.

Israel has reported at least 10 people, including two children, were killed in rocket attacks carried out by Hamas, the Palestinian group ruling Gaza.

The escalation was sparked last Monday when Israeli forces cracked down on protesters at the Al-Aqsa Mosque compound in occupied East Jerusalem, wounding hundreds of Palestinians. When Israel failed to meet a Hamas deadline to withdraw its forces from the area around the holy site, which is sacred to Muslims and Jews, Hamas fired several rockets towards Jerusalem. Shortly afterward, Israel began its air raids on Gaza.

According to the UN, at least 58,000 Palestinians in Gaza have been internally displaced. At least 42,000 of them have sought shelter at 50 UNRWA schools across the coastal territory. The figure includes at least 2,500 people whose homes have been destroyed in the Israeli bombardment.

In a brief statement on Monday, UNRWA spokesman Adnan Abu Hassan said the agency has started to provide some basic needs for the displaced families.

“We are in urgent need of support,” he said, referring to the Israeli closure on May 10 of the border crossing that is used to bring in humanitarian aid.

‘I need blankets for my children

Majda Abu Karesh, a mother of seven whose house in Beit Lahia has been destroyed, said the families have had to fend for themselves regarding basic supplies.

“This is the fourth war we’ve had to seek shelter in a school,” she told Al Jazeera.

“For five days now we’ve been sleeping on bare floors, and we haven’t received food or any supplies from UNRWA. There isn’t even clean drinking water, and the toilets are a mess.”

Shaher Barda, who was forced to leave Shujaiya with his family with only the clothes on their back, said the refugee agency has not “cared much for our situation”.

“We gathered ourselves, and every person paid 1 shekel ($0.30) so we could buy enough water,” he said. “We’re not here by choice, but because our homes are not bombed shelters and no one would have survived the crazy Israeli attacks.”

An Israeli army spokesman on Friday acknowledged the intensity of the bombardment and shelling and said the predawn blitz included 160 warplanes and used about 450 missiles and shells to attack 150 targets within 40 minutes.

The spokesman said the army had targeted an expansive network of underground tunnels used by Hamas, but many in the area have disputed the statement, saying they did not see any fighters.

Rajai, a relative of Barda, said he and his family could not go back to their home because it is too dangerous.

“For many families here, since we live in an area near the Israeli fence, this is not our first time being displaced,” he said, sitting on a piece of cardboard that now doubles as his bed.

“We want the world to support us,” he continued. “And we in Gaza are behind the Aqsa Mosque and Palestinians in Jerusalem and elsewhere. We all need to stand together. But now I just need blankets for my children, who couldn’t sleep last night from the cold.”

How Muslims Have Preserved Islamic Art?
Next Post:What Is The Rationale For Crypto Sukuk?