Islamic Fashion on the Rise in Malaysia 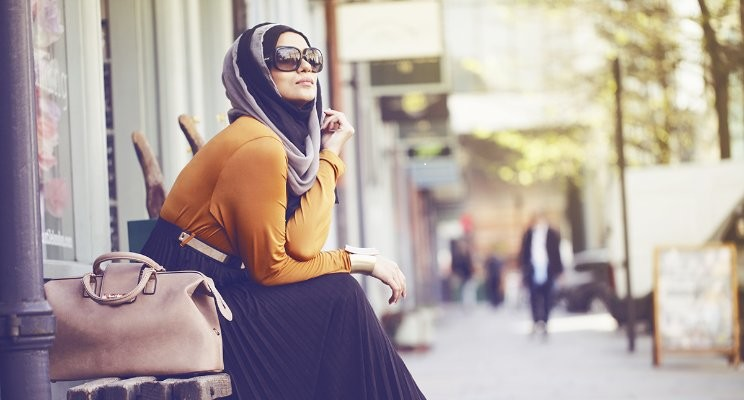 As many Muslim women choose to dress modestly, more brands are joining this juicy market

When designer Vivy Yusof embraced Islamic fashion four years ago, she probably never thought her decision would help her own business take off. The 28-year-old Yusof, until giving birth to her first child, had not worn the hijab, a scarf that covers her head and chest. Adult Muslim women are expected to dress modestly when they are in the company of men who are not part of the family.

Proud of her decision, Yusof shared a casual photo of herself wearing a scarf on her Instagram account. In the caption, she says: “I’ve made my decision and in Him, I put my trust,” The photo has more than 10,000 likes and over 800 comments from supportive followers, many exclaiming “Alhamdulillah!” (Thank God).

Since then, the designer has not stopped sharing her stylish outfits, always wearing three-quarter sleeve tops and headscarves that cover the chest. Yusof’s Instagram account has already surpassed a million followers.

For many Malaysian Muslim women, she has become a real guru: her urban style is an inspiration for many as an example of living a modern life without renouncing her faith. Women’s attire has always been the subject of controversy, with those exposing their bodies or covering themselves as much as possible both drawing commentary.

So it is, perhaps, not surprising that Yusof took the opportunity to create her own brand, dUCK. She and her husband, Fadzarudin Anuar, had already gotten their hands into the fashion industry. In 2010, the couple embarked on FashionValet, one of the most popular online fashion stores in Southeast Asia.

Although there are no specific statistics on the number of women who have embraced the hijab in Malaysia, several brands have reported rising sales. According to a Thomson Reuters report, in 2015 Muslim consumers worldwide spent $243 billion. An estimated $44 billion was earmarked for modesty.

According to Pew Research, by 2050 the world’s Muslim population will grow to an estimated 2.76 billion, constituting 29.7 percent of the global population. Big companies have already begun to embrace this growing market. Prominently, Nike announced in March that its first hijab for athletes will be released in 2018.

Contrary to what may seem like an emerging new trend, “modesty has not grown,” explains Alia Khan, chairwoman of the Islamic Fashion and Design Council. The emergence of Internet pages, blogs, and social networks that feature celebrities like Yusof have just “given people more aware of something that was always there.”

“Modesty has been a big thing since the beginning of time,” says Khan. “And those that adhere to modest style don’t do it because it’s in or not, they do it because it aligns with their life values, and they do it for a higher reason, not for the sake of trends.”

In Malaysia, however, the trend of Islamic fashion is a relatively new phenomenon, says Dr. Alicia Izharuddin, senior lecturer in Gender Studies at the University of Malaya in Kuala Lumpur. The trend, she says, complements the political imperative that Islam and business are compatible and that Malay Muslims should succeed financially while being overtly pious in public life.

Malaysia is considered a “moderate” Muslim country because women have more freedoms outside the home to work, socialize, and drive cars than in some Muslim-majority states. But these basic civil liberties, Azharuddin says, are “gradually eroding in some areas of women’s lives,” These are more specific to superficial issues “such as how one should dress in government buildings, libraries, [and] hospitals, and not just places of worship.”

The main reason why Malaysia maintains a “moderate” label is because it is a multicultural society. About 60 percent of Malaysia’s population is Muslim, mostly ethnic Malays. The 1957 Constitution in theory guarantees religious freedom for non-Malays, yet Islam is the state religion. Muslims are subject to a dual legal system: while Islamic sharia courts handle cases involving Muslims, secular courts handle those involving non-Muslims. The Islamic “morality police” are the ones enforcing religious customs, such as modest attire for women.

As James Chin, director of the Asia Institute at the University of Tasmania, explained, the use of the hijab began to increase especially after the Iranian revolution in 1979, and as religious conservatives “gained positions in Malaysia.”

The explanation for this lies in the frequent friction between the United National Malaysian Organization (UMNO) and the Islamic PAS party since the early 1980s, and the use use of religion as an electoral weapon to get the vote of the Muslim majority.

UMNO is the largest force in the Barisan Nasional coalition which, along with its predecessor, has ruled the country since its independence from Great Britain in 1957. In the 1980s, under the government of Mahathir Mohamad, a series of reforms were taken to boost the party’s Islamic credentials to pass over PAS.

The latest elections gave Barisan Nasional the worst results in its history and the personal popularity of Prime Minister Najib Razak has plummeted following the ever-growing 1MDB scandal. That has led to a frantic scramble to shore up Muslim votes.

In March, an amendment to sharia law was expected to be discussed in Parliament. The amendment would relax the limits on sentences handed down in certain cases. Currently, sharia courts impose maximum sentences of three years’ imprisonment, fines of up to 5,000 ringgits (about US$1,150), and six lashes. The bill, proposed by the president of PAS, Abdul Hadi Awang, seeks to increase these limits to 30 years, 100,000 ringgits ($22,000), and 100 lashes.

The project was postponed until the next parliamentary session but is not dead. Najib supported Hadi’s plan during the UMNO General Assembly last December. But in March, it was said that the government would not table the bill, citing a lack of consensus within the ruling coalition. This means that PAS would have to return to its plan to present it as a private member’s bill.

Some areas of Malaysia are more strict about enforcing modest dress than others. In the capital, Kuala Lumpur, many women dress modestly, including covering their heads, but the social pressure is quite relaxed. Authorities in the conservative states of Kelantan and Terengganu, however, can find Muslim women who do not wear the scarf or wear tight clothing.

“Removing the veil is a very sensitive issue and taboo,” says Azharuddin. Its non-use has even given rise to some cases of hijab-shaming. For example, in 2015 the daughter of Sultan Johor and his wife, Tunku Aminah Maimunah Iskandariah, received a string of negative comments for not wearing the scarf in her pictures on Instagram. The story was widely commented upon in local media.

In her defense, one of her brothers posted a picture with her hair tied in a bun and said she prayed more often than those who cover their heads. He added a photo, where he wondered: “Is not that good enough? Is it not between Allah [God] and her?”

The question is perhaps not be so simple. The business of modesty is a lucrative one, and religion will continue to be used as a political tool.