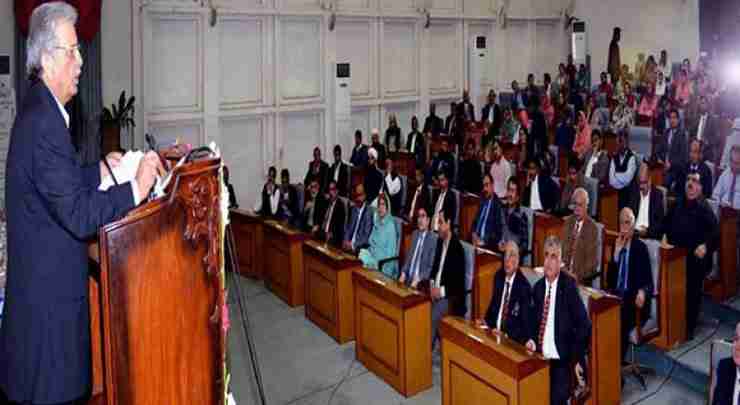 Islamabad: Federal Minister for Science and Technology Rana Tanveer Hussain has said that the National Assembly has passed a bill to establish Pakistan Halal Authority that will start functioning within the next two months.
Speaking at the inaugural session of the International Conference on Halal Foods, Pharmaceuticals and Cosmetics, jointly organized by Pakistan Council of Scientific & Industrial Research (PCSIR) in collaboration with Islamic Food and Nutrition Council of America (IFANCA), at PCSIR Complex on Monday, the minister said that the Authority would ensure supply of halal food to the market, and keep an eye on imported food items, as several imported packed food items being sold in the markets contained ‘haram’ ingredients. He said presently the ministry was not mandated to stop the sale or purchase of such products in the country.
However, he said, “Its affiliated organizations, such as Pakistan Standards and Quality Control Authority provided services, about the setting of standards, accreditation of testing labs, to the federal and provincial regulatory authorities.”
The minister said that as per Trade Policy 2012-15, the import of all edible products shall be subject to the condition that they shall be free of any “haram” element or ingredient.
He hoped that halal food processing in the country would help earn precious foreign exchange that would strengthen the national economy.
“Besides halal food, the government would also ensure halal cosmetics in the country,” Tanvir said, and informed, “The world has also acknowledged that halal food is good for human health.”
Local as well as international experts highlighted the need for halal meat. They also spoke about fundamentals of halal certification, animal welfare, the impact of the halal slaughter on meat’s quality, pre and post-slaughtering procedures, global market and demand for halal meat, strategies to increase the share of halal meat in the global meat market, livestock management, slaughterhouse automation-machinery, and utilization of halal meat in the preparation of processed and semi-processed food items.
The main aim of the seminar is to promote the trade of halal food, and also highlight its importance at the international level.
Halal meat exporters, veterinary doctors, food technologists, and participants from the hotel industry were greatly benefited by the seminar.
The key speakers included PCSIR Chairman Dr. Shahzad Alam, PCSIR DG Dr. Sakhawat Ali, GC University Faisalabad Director Dr. Faqir Anjum, Dr. Nadeem Riaz, and Justice (r) Khalilur Rahman.
Later, talking to the media persons, Tanvir said the government was open for accountability.
He said NAB, and other relevant institutions, were working to check corruption in the society. He, however, said there was a need to further improve the functioning of NAB to make it more efficient, adding, “It is also creating hurdles in several developmental projects.”
PCSIR Director-General Dr. Sakhawat Ali observed on the occasion that the halal meat market was growing rapidly throughout the world
“Pakistan is on 18th position in terms of the halal meat market, and its volume is only 2.9 percent of the global halal meat production, which is very low,” Sakhawat said, adding, “Being a Muslim-majority country, Pakistan could play a pivotal role in this growing market because Pakistan has more than 160 million quality livestock, including 71 million cattle and buffalos and 89 million goats and sheep.”
He said there was no Muslim country included in the list of the first 10 halal meat exporters; although Pakistan, Sudan,, and other Muslim countries had a big potential for exporting the halal meat.
Sakhawat added that the term halal meat did not mean the meat only, but also included more than 26 industries, based on the bi-products of halal meat, such as bone crushing, gelatin, sausages, leather,, and other industries.
Justice (r) Khaleelur Rahman said that the government was working to introduce Pakistan to the world. as a Halal Kitchen
“Pakistan has the potential of becoming a market of halal food in the world, Khaleel said, adding, “However, there is a need for marketing in the international halal market properly.”
He stressed the need for strengthening the farmers so that a large number of livestock and their products could be supplied to the international market.
He said the creation of PHDA had been termed as a step towards making Pakistan a halal food hub
“The demand for healthy and safe agro-livestock food products is increasing rapidly, with increasing population and socio-economic conditions,” Khaleel said, adding, “This will also open up new economic opportunities and employment for the youth and traders.”
According to the speakers, a large number of imported food items contain haram ingredients, including white wine, red wine, gelatin,, and E120, a food color derived from insects.