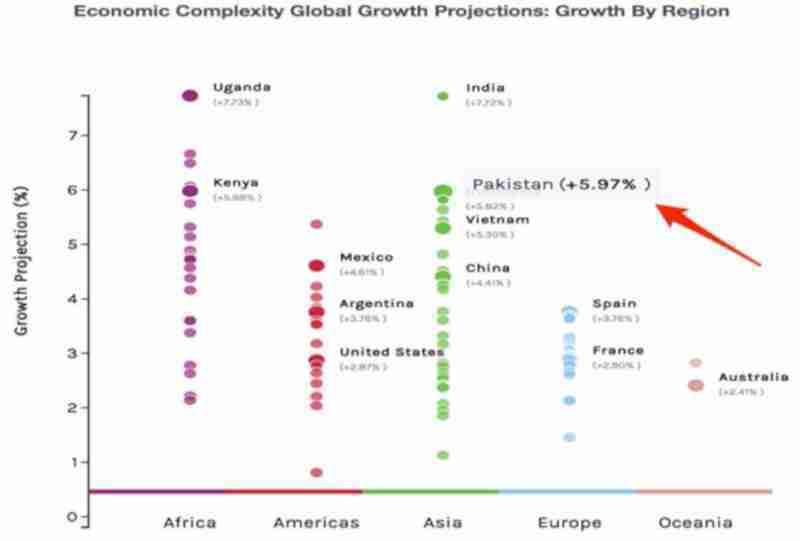 Pakistan’s GDP Growth Rate Is Even Higher Than That Of China: Harvard Study

Pakistan’s predicted annual growth rate over the next 10 years is nearly 6 per cent, according to the revised growth projections presented by researchers at the Centre for International Development (CID) at the Harvard University.

This is a one-point GDP increase as in the CID’s earlier projections, Pakistan GDP was set to grow at 5 per cent by 2025.

Although China’s huge economy (current GDP at $12 trillion) cannot be compared with that of Pakistan (current GDP at $300 billion), Pakistan’s 5.97 per cent growth rate is above that of China, which is set to grow by 4.41 per cent.

Led by Harvard Kennedy School, the research is called ‘The Atlas of Economic Complexity’.

The CID’s growth projections are based on the measures of each country’s economic complexity, which captures the diversity and sophistication of the productive capabilities embedded in its exports and the ease with which it could further diversify by expanding those capabilities.

According to the Harvard study, the economic complexity not only describes why countries are rich or poor today, but can also predict future growth — about five times more accurately than the World Economic Forum’s Global Competitiveness Index.

Pakistan’s neighbour India, on the other hand, is predicted to grow by 7.72 per cent, the world’s highest. The CID believes that the economic pole of global growth has moved over the past few years from China to neighbouring India and it is likely to stay there over the coming decade.