Global food prices are soaring everywhere in the world. Profit margins for farmers are becoming thinner. It must be a wake-up call for Muslims the world over as we, the Muslims import almost 85% of whatever we consume today from non-Muslim countries.

So, what do we need to do to take things into our own hands and start becoming producers instead of living a parasitic life for two billion Muslims? That is an important issue that we plan to address in an upcoming blog post. Hopefully, that will help millions of Muslims start their entrepreneurial journeys. 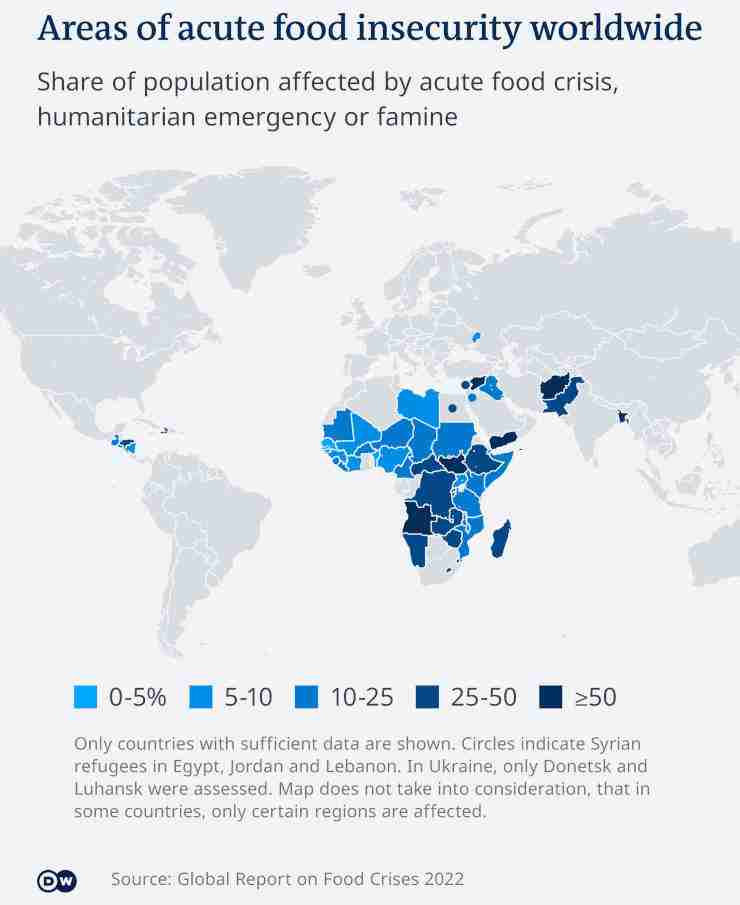 The following article appeared in the international media which clearly shows where the world economy is heading to.

Food production costs were already high. The pandemic snarled supply chains, making it more difficult — and expensive — to get seeds and supplies that are vital for growing crops. Then Russia’s invasion of Ukraine took things to another level, sending markets soaring for fertilizers and for the fuels needed to run farm machinery. Inflation is so rampant that even with rising food prices, farmers are facing increasingly tough margins.

That’s the problem for Eddie Smith, who has been growing mangoes in Australia for 16 years. He estimates his costs have about doubled in that time. To mitigate the squeeze over the years, he’s taken steps like miniaturizing his trees and reducing diesel consumption. But the current, dizzying surge in crude oil is having a pincer-like effect, and for the first time, he’s considering winding down the business.

“Everybody’s doing their bit to try and reduce their input costs, but at the same time everything goes up,” he said from his 3,000 tree farm in Carnarvon, on Australia’s far western coast. “Fuel goes up, water goes up, fertilizer goes up, labor goes up, and I can’t see an end to that at this point.”

The timing couldn’t be worse. The world was already contending with rising hunger after the pandemic’s blow and droughts that parched crops in key growing regions. Global food costs jumped to a record in February and are up about 40% from two years ago.

Things are so dire that the planet could be facing a “tipping point” when it comes to long-term stability for global food supplies, according to Beth Bechdol, deputy director-general of the United Nations’ Food and Agriculture Organization.

Oil’s surge past $100 a barrel has sent diesel futures in Europe and the U.S. to the highest in decades. Increasing fuel costs will raise expenses for farmers who have to run a lot of heavy machinery for sowing, tilling, and harvesting. It will also be costlier to heat barns that house livestock.

Prices for fertilizers, used to grow practically all crops, have also risen dramatically in the past year. A crunch for natural gas supply, elevated freight rates, tariffs, extreme weather, and sanctions on key producer Belarus all contributed to the rally. And now Russia, the biggest exporter of urea and No. 2 for potash, is seeking to end fertilizer exports, threatening a global shortage. The Green Markets North American Fertilizer Price Index has doubled in the last 12 months to reach a record.

Supplies for seeds and other chemicals like pesticides are also “extremely tight,” Corteva Inc. Chief Executive Officer Chuck Magro said at a recent conference. And prices for tractors made by companies like Deere & Co. are on the rise.

If farmers can’t keep up with their higher costs, they could be forced to pull back on production, leaving the global food-supply situation even more precarious.

Chris Edgington grows corn and soybeans on 3,000 acres near St. Ansgar, Iowa. During a typical year, he budgets about $700 to $850 per acre for his input costs. This year, he expects that number to reach $1,150. And “a lot of that is borrowed money,” he said. For now, he expects the rally in grain prices will help make up for his larger expenses, but, he warns, the situation could get “pretty, pretty tight.”

Farmers in Iowa, the biggest U.S. state for corn, are paying triple what they did two years ago for anhydrous ammonia, a widely-used nitrogen fertilizer. Urea has surged 143% to almost $930 a ton, while diesel costs are up 133% to $4.43 a gallon, according to March figures from the U.S. Department of Agriculture.

“None of them individually are a total game-changer, but when you add all these prices together, we’re going to handle more dollars for the same opportunity of margin that we had a year ago,” Edgington said.

We have a lot more risk. We have a lot of dollars invested. And we’re just barely going to break even,” he said.

Agriculture accounts for about a fifth of the economy in India, where nearly 60% of its 1.4 billion people depend on farming, directly or indirectly, for their livelihood. The country is the world’s second-biggest grower of sugar, wheat, rice, and cotton.

Connect the dots on the biggest economic issues.

Dive into the risks driving markets, spending, and saving with The Everything Risk by Ed Harrison.

Birbal Singh, 49, a farmer in the state of Uttar Pradesh, grows rice and wheat on a little more than 2 acres. He uses diesel to run the pumps that water his crops, and it’s also used in tilling machinery. Fuel prices have risen more than 30% in the country’s capital New Delhi since 2020, according to data from state-run Indian Oil Corp. He has to till his land four or five times before it’s ready for crop seeding. Plus he’s having to spend more on fertilizer if he’s lucky enough to find enough supplies.

Further south in Maharashtra state, Murlidhar Patil, 75, grows guava, wheat, and soybeans with his brother. Since the start of the pandemic, food inflation has meant that demand is falling for the fruit he grows. While prices may be up at the market, Patil is getting paid less for his crops, which now fetch as little as 25,000 rupees ($330) annually per acre, down from as much as 60,000 rupees three or four years ago, he said.

“We are suffering a lot,” Patil said. “Prices of all our inputs have risen, but rates of my products haven’t risen. And at the same time, labor costs have also risen. It’s really painful.”

Many farmers in Brazil, the world’s top soybean exporter, aren’t waiting to see if their costs start to pull back. Instead, they’re buying up fertilizers and other inputs now, rather than taking a gamble.

That’s the case for Eduardo Zorzi, manager for Bavaresco Group, which farms more than 20,000 acres in Sorriso, Mato Grosso. It’s not just concerned about prices that led to his decision, he said he’s also worried about actually getting the supplies he needs in time.

“With the crazy volatility we are seeing, I decided not to wait any longer and bought my fertilizers for the upcoming soybean crop,” he said.

Leandro Bianchini took similar action. Bianchini is the commercial supervisor for Coaching, the largest co-op in Mato Grosso that plants more than 1 million acres a year, and he didn’t want to take any chances for the next soybean harvest. So he’s already purchased all the inputs needed for the planting season, which doesn’t start until mid-September. Now he’s even looking ahead to the 2023 winter corn crop that will be sown next March.

“There are still lots of unknowns on those costs, and grain prices are not as high as costs for next year,” Bianchini said.

11 Sample Halal Restaurants in the USA
Next Post:How To Declare Something Halal Or Haram?