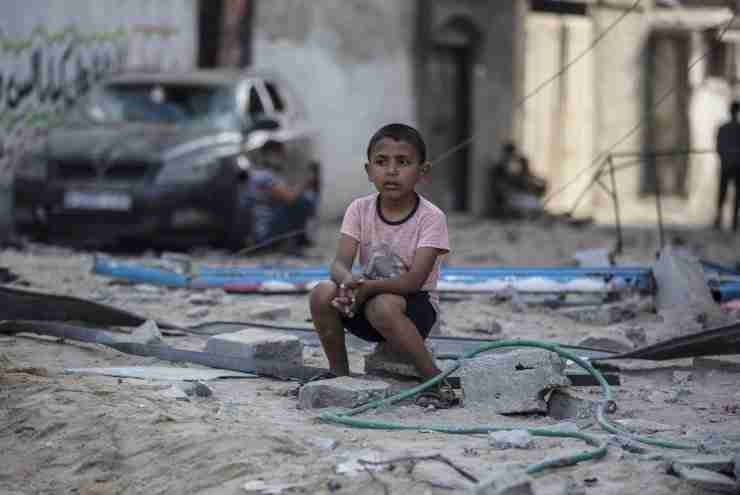 What Is The Impact Of Israeli Bombardment On The Economy Of Gaza?

The Gaza Strip in Occupied Palestine houses some two million people. The territory is 41 kilometers (25 mi) long, and from 6 to 12 kilometers (3.7 to 7.5 mi) wide, with a total area of 365 square kilometers (141 sq mi). Officials in Gaza state that basic supplies and power are running low in Gaza whereas, Israel’s manufacturers have said that the loss to the economy between May 11-13 reached $166 million.

The Israeli army has targeted and destroyed many economic and commercial facilities in the Gaza Strip during its ongoing attacks for the 11th day running, Euro-Mediterranean Human Rights Monitor said today in a statement.

The Israeli airstrikes have destroyed or damaged more than 525 economic establishments, including 50 factories during its current attack on the Gaza Strip, according to initial reports.

Gaza’s housing ministry said on Thursday that 16,800 housing units had been damaged. Of those, 1,800 had become unfit for living and 1,000 were destroyed completely.

The United Nations and aid groups said Palestinians now had limited or no access to water facilities.

“Families in Gaza, and our staff, are telling us that they are at breaking point,” said Jason Lee, country director with aid group Save the Children.

UNRWA, the UN’s refugee agency for Palestinians, launched an appeal on Thursday for an additional $38 million in funding to cover urgent humanitarian needs in both Gaza and the Israeli-occupied West Bank, a scene of further unrest in recent days.

Negative repercussions directly inflicted Gaza’s economic sector due to the bombardment and destruction of facilities, which led to other indirect effects because of closures caused by continued Israeli attacks.

On May 11, the Israeli forces destroyed the Al-Jalil ice cream factory near the Kuwait Roundabout in the Zeitoun neighborhood, south of Gaza City. Later that day, the forces bombed the Abu Al-Khair factory, east of Jabalia, and the Hamada Ceramic Company.

In the past two days, Palestinians have witnessed artillery shells falling on nine factories and companies operating in the industrial zone in eastern Gaza City. This has led to extensive damage to the area. The attack on the region constitutes a flagrant violation of the protection this area enjoys under its foundation agreements.

The industrial zone is built on an area of ​​123.5 acres and lies near the Karni crossing. It was established under agreements with the support of the U.S. Agency for International Development (USAID), the World Bank, the European Investment Bank, and the European Union.

On Monday, March 17, 2021, Israeli artillery targeted the FOMCO mattress-making factory, east of Jabalia. The shells caused a huge fire to erupt in the factory that destroyed large parts of it.

The following day, May 18, the Israeli artillery targeted Abu Iskandar, a plastic-making factory in the industrial zone. The shells caused fires to erupt inside, and tons of raw materials burned.

Other companies and factories were severely damaged in the attacks such as the Harb co., Clever co., the Tal Al-Zuhoor co., BSW co., the Al-harir factory for potato chips, the Maatouq ice cream factory, the Ali Al-Wadi factory, and the warehouses of the Bidco co.

Preliminary estimates indicate that 525 commercial establishments have been damaged, including shops and commercial centers at the ground floor of the buildings and towers that were destroyed by the Israeli warplanes across the Gaza Strip.

Head of the Businessmen Association in Gaza, Ali Al-Hayek, told Euro-Med Monitor that it is difficult at this stage to calculate the number of destroyed or damaged factories and establishments or to estimate the extent of their losses.

No less than 50 factories, in addition to dozens of shops and other facilities, were completely or partially destroyed due to the continuous Israeli bombing operations, he said.

He stated that there are indirect damages caused by the military attack including those caused by the state of closure and power cuts.

Verifying the damage inflected to many economic establishments has been unattainable as these facilities are hard to reach and located in dangerous areas.

The economic sector has already been suffering difficult conditions due to the Coronavirus Pandemic, Israeli blockade, and attacks on Gaza.

The destruction and disruption of factories and economic establishments have pushed thousands into unemployment, which is already sky-rocketing high with a rate of about 49% in the Gaza Strip. This rate increases among youth and graduates to more than 67% due to the ongoing Israeli blockade for nearly 15 years.

The violent and disproportionate Israeli attacks may cause a humanitarian catastrophe that has begun to affect all basic aspects of life in Gaza.

The Israeli authorities must stop their attacks on residential communities and civilian objects that include towers and commercial companies. The international humanitarian law recognizes the necessity of protecting these objects and criminalized such attacks constitute war crimes and require criminal accountability.

The international community, led by the United Nations General Assembly, the Security Council, and the European Union, must shoulder their legal and moral responsibilities regarding the escalation of unjustified violations against civilians and exert pressure on Israel to stop the military attacks on the Gaza Strip.

What Is The Rationale For Crypto Sukuk?
Next Post: Omanization Hits 10% in Tourism Sector As Locals Enter Workforce