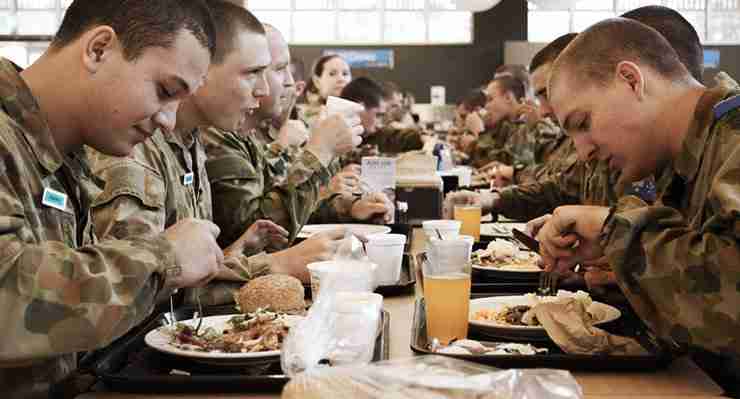 Australian army has issued orders that one-third of its meals to the combat troops has to be halal-certified. This followed a series of changes in the ration packs to the troops.

The new changes were approved by the Deputy Chief of Army Major General Rick Burr. The halal option comes up despite Muslims forming a tiny fraction in the Australian Defence Force.

However, the changes have made the food packs more diverse. There are kosher, vegetarian, and halal options to choose from. Four of the 12 menu options will be strictly halal-certified. The inclusion of Kosher and vegetarian meals has been justified as “ending menu fatigue.”

The 9 News report said the changes would “meet ADF’s commitment to providing an inclusive working ­environment.” But critics point out that ADF has only less than 100 Muslims in it. 60,000 full-timers and reserves are serving in the ADF. Flaying the decision, Senator Cory Bernardi said the military has been “captured by minority interests and suspended the application of common sense.”

“Australia is not an Islamic country and our soldiers, sailors and airmen and women deserve better from the government and the politically correct top brass,” Former Army intelligence officer Bernie Gaynor said.

Meanwhile, it is being pointed out that the Australian army’s urge to accommodate Muslim sentiments is not new. In 2015, the Australian Army removed the motto “In this sign conquer” from its 102-year-old hat badge. The motto was dubbed offensive to Muslims. This followed the directive of an imam who joined the Religious Advisory Committee of the Services. The Daily Telegraph reported that Australian Army chaplains had been carrying the motto since 1913.

However, a Defence spokeswoman denied that allegation. She said the motto change was made to reflect the changing times. It had nothing to do with Crusades or religious sentiments. But the change drew strong reactions.

“The government must stop the political correctness. It must dismiss the Defence Imam for his views. And it must put Australia first,” said former army major Bernard Gaynor.