Can Saudi Arabia Become the Next Tourist Hotspot?

Is Saudi Arabia ready to become the next popular tourist spot? Efforts are in progress to guarantee this will happen in the next few years.

Saudi Arabia appears confident that it can replace other countries in the region as the region’s primary tourist destination. Indeed, with the help of its Vision 2030 initiative, the Kingdom is concentrating on opening itself up to the world. It also planned investments of $810 billion in cultural, recreational, and entertainment projects over the next decade. Already, this plan has done wonders to increase the country’s appeal as a vacation spot. In 2030, they will surely achieve their target of annual 100 million tourists.

The developed hospitality environment is largely responsible for optimistic projections. The tourism industry in Saudi Arabia is able to showcase its advantages because of massive projects in the country.

The Amala Project, sometimes referred to as the “Middle East Riviera,” is planned to provide more than 22,000 jobs and 2,500 hotel rooms by the time it is finished in 2028. These initiatives are designed to keep them in the Kingdom. Also, to prevent Saudi visitors from leaving for the United Arab Emirates (UAE).

With these recreational upgrades, the Vision 2030 initiative has set a target of 30 million international pilgrims doing the Umrah by the year 2030. As a result, the number of visas based on religion will increase. New luxury buildings like the new Jeddah Marriott and the new Shangri-la Jeddah Hotel are already open for tourists. It provides an additional 1,800 or 2,000 keys to the city of Jeddah.

To promote the new tourist facilities in the Kingdom, religious visas are now convertible into foreign visitors’ visas for all nationalities. 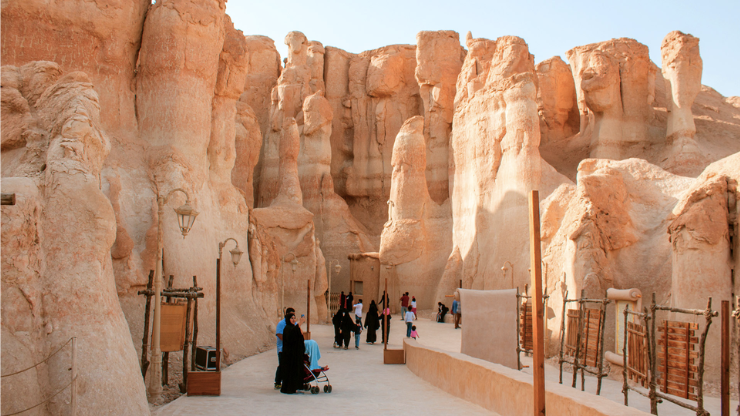 Muslim tourists are projected to double from 25 million in 2000 to 50 million in 2026. Because of this rise in tourism, it’s crucial that businesses fulfill the requirements of this group. They should also respect their cultural beliefs and rules. The Halal Travel Frontier 2019 report will use in preparation for the growing number of Muslim tourists and encourage better cultural awareness. These developments indicate that environmental fairness and cutting-edge technologies like AI and AR will play significant roles in the future of the Halal tourist industry.

Hotels are catching on to the needs of Muslim guests by facilitating access to Ramadan services, stocking Halal food, and taking other measures to make guests’ stays more pleasurable. The visa process for Muslims traveling to Saudi Arabia to worship in Mecca is becoming less difficult.

The Kingdom of Saudi Arabia is prepared to emerge as a new tourism power in the Middle East. But it still confronts several challenges, especially in terms of political stability. Potential international visitors still have doubts about visiting the Kingdom because of its reputation for restrictive laws, poor treatment of minorities, and a lack of respect for human rights.

With the help of the 2030 vision, Saudi Arabia is all set to face its difficulties. It recognizes some of these difficulties through its plans, which include, for example, granting visas to citizens of specific nations and implementing social reforms.

The global effects of the COVID-19 epidemic are another key obstacle. This difficulty occurred during the time of the ambitious Vision 2030, and it may have made it more difficult to stick to the plan. Tourism in Saudi Arabia has taken a major hit as a result of social lockdowns, grounded flights, and closed borders brought on by the coronavirus outbreak. Due to this, Marketresearch.com has reduced its short- and medium-term Saudi Arabia tourist projections.

Saudi Arabia is well-positioned to achieve its Vision 2030 targets in the tourist and hospitality sectors. They are ready to face obstacles such as the coronavirus pandemic and competition from other tourism markets. As a result of its significant projects and massive government funding, it is opening up new job opportunities in various fields. In the next decade, Saudi Arabia will be viewed not as a closed country, but as a thriving destination for visitors from all over the world.

What Generation Z Wants from Halal Brands?
Next Post:The Top 5 Challenges Faced by the Halal Industry and How to Overcome Them