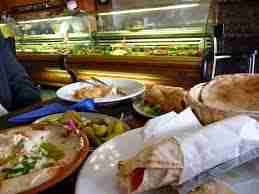 The lack of a nationwide halal food certification system has become a major hurdle for Chinese halal food companies looking to go global.

China’s halal food exports make up just 0.1 percent of the world’s halal food market, according to statistics issued by the China Council for the Promotion of International Trade. Prospective exporters largely blame the lack of recognition of China’s certification as a key obstacle to building shipments to the lucrative markets in the Arab world.

Li Ziran, the director of the Institution of the Halal Industry at Ningxia University, in an interview with Liang for the article, said that “the lack of a nationwide halal food certification system, similar to what other Muslim countries have, has become a major hurdle for Chinese halal food companies looking to go global.”

Ma Bing, director of China’s regional Ningxia certification center, added: “Some countries have used the certification system as a trade barrier to prevent Chinese companies from entering their markets.”

So far, Chinese halal food producers have been getting by on the basis of such regional or local certification. In the central province of Henan, for instance, halal certification is issued by the local Ethnic Affairs office, a government bureau which oversees China’s ethnic minorities in the area. However, these halal food producers largely cater only to the local Chinese Muslim population.

For halal food producers who want to export, they cannot expect China to order a nationwide certification system anytime soon. However, the central government is helping them in other ways.

Every September, China hosts the China-Arab States Expo in the capital of the predominantly Muslim Ningxia Hui autonomous region as a platform to promote trade between China and the Arab states. It also has a free trade agreement with the Association of Southeast Asian Nations which gives the country’s halal producers better access to the halal markets of Indonesia, Malaysia and Brunei.

For his part, Zhang Hongyi, the general manager of the Jingyitai Halal Food Company, told the Global Times that he intends to overcome the trade barrier by building a halal food factory in Dubai in the United Arab Emirates (UAE), making him the first Chinese halal food manufacturer to make a direct investment right inside an Arab country.

Zhang said: “Our goal is to be one of the best halal food companies in the world. Jingyitai hopes that by setting up a factory in Dubai, we will be able to sell our products to pilgrims on their way to Makkah.”