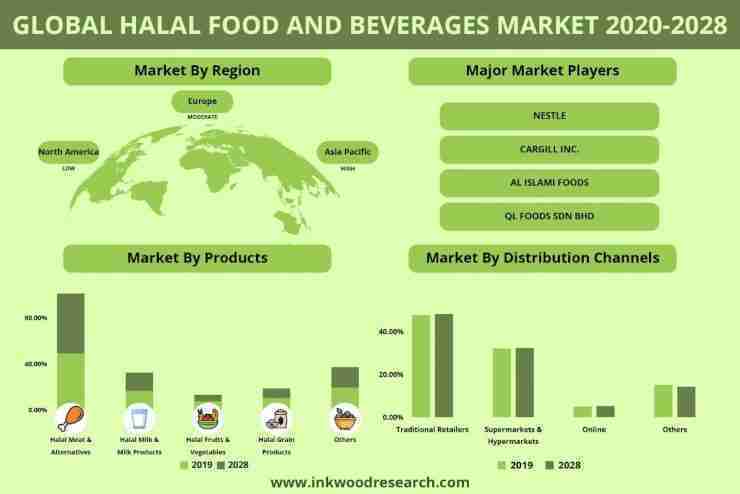 The global Halal market is expected to reach $875.99 billion by 2028. It is one of the fastest-growing markets in the world. Now, the market is estimated to grow at an annual rate of 6.05% in terms of value.

Drivers Behind the Growth

Islam is a global religion and is not confined to the Muslim-majority nations such as Indonesia, Pakistan, Saudi Arabia, and Egypt. Large Muslim populations live in Muslim-minority countries as well.

The Muslim population in western countries has substantially increased, compared to that of, before the 21st century. This is due to the increasing immigration from the Middle East and Asian Muslim countries. Driven by immigration and high birth rates, the Muslim population in Europe has tripled over the last three decades, and a similar trend has been witnessed in other regions as well.

Research studies show that, if the trend continues in a similar fashion until 2030, 79 countries are anticipated to account for over a million Muslim inhabitants by 2030, as opposed to 72 nations in 2011. The new countries to join in the league of growing Islamic population can be Canada, Congo, Belgium, Guinea Bissau, Togo, and the Netherlands.

The increasing global Muslim population is expected to have a wide-ranging influence on the global halal food & beverage market size, and the consumption of halal products over the forecast period.

In 2019, the traditional retailers’ category captured around 47.79% of the revenue share in the global halal food & beverage market. On the other hand, online is anticipated to be the fastest-growing distribution channel.

Businesses owned or run by Muslims typically tend to rely on the trust of consumers since the products sold are assumed to be in line with both parties’ religious values. In contrast, the non-Muslim-owned businesses, or the larger-scale businesses with limited transparency into operations, invest time and resources abiding by the regulatory guidelines for the halal certificate.

The key advantage of buying meat from a halal butcher shop is that the customer is assured that the meat is 100% halal. The other advantage is that the customer can negotiate with the butcher for discounts. Halal meat purchased from the internet is of great quality since it has to follow the standards and regulations set by the Islamic religion.

The meat can be traced back to the source or the farm where it was reared. Thus, the consumer is offered the best quality product. Buying halal meat online gives you the opportunity to have a range of selections of available options.

On the other hand, the global halal food & beverage market growth is restricted by the implementation of halal standards throughout the value chain. Although the concept of halal is garnering attention and strengthening its market position in Muslim as well as non-Muslims countries,

issues like inappropriate hygienic practices and production & processing facilities, and most importantly, the expiration of halal certifications create an environment for weakening consumer trust. The supply chain and logistics are other important aspects of the halal food industry that need to be upgraded.

The logistics aspect of these products is critical since the halal integrity of the supply chain works from farm to table.

Malaysia seems to be ready to take advantage of the business opportunities the surge in the global halal market is offering to the world.

The custodian of Malaysia’s halal industry has called on private halal companies to take full advantage of government support for a bigger slice of a global market projected to hit RM10 trillion (US$2.4 trillion) by 2024.

“Although the global halal economy outlook is affected by the pandemic, we are still expecting a growth of 3.1 percent in terms of compounded annual growth rate in the next five years.

“So we estimate that by 2024, the market value for halal markets will reach up to US$2.4 trillion,” he said during a panel discussion of the Securities Commission Malaysia-HDC Forum on Shariah-Compliant Fundraising for micro, small and medium enterprises held virtually Friday.

He said the Malaysian government has put in place a comprehensive halal ecosystem with the implementation of the Halal Industry Master Plan 2030 (HIMP 2030) which was developed to leverage Malaysia’s strengths in the halal industry.

“The HIMP 2030 brings together analyses of halal industry trends and projections both globally as well as in Malaysia and assesses industry developments based on the focus sectors.

“This master plan has lined up a developmental framework for Malaysia’s halal industry and highlights opportunities for Malaysia‘s socio-economic growth to maximize potential economic returns over the next decade and beyond,” he added.

Hanisofian said the government would provide incentives and comprehensive platforms to facilitate participation, operations, and growth, especially in building a conducive halal ecosystem.

MATRADE To Push For Digitally Enabled Trade At Mihas 2021
Next Post:Fardows, a Halal Islamic Challenger Bank Launches its Waitlist to Public