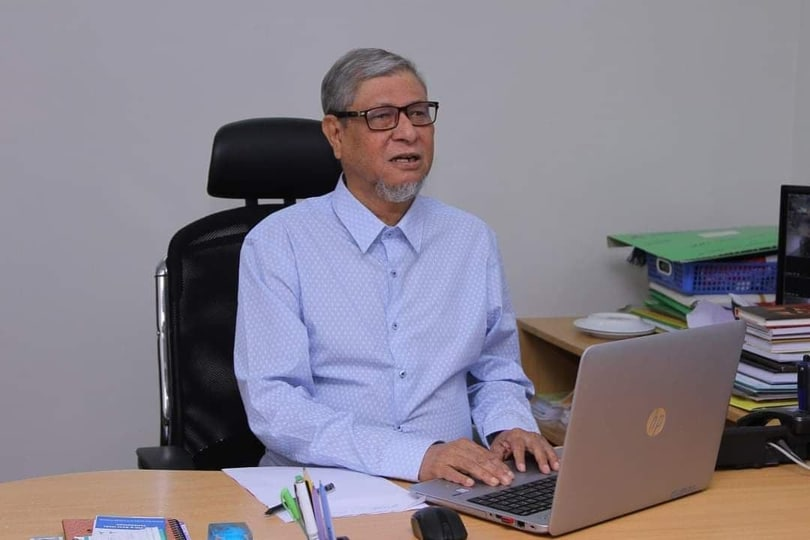 “Late Shah Abdul Hannan (September 23, 1939- June 2, 2021) will be a unique example of humanity, patience, humility, gentleness, and practicing Islam in real life”, said Dato’ Seri Dr. Anwar Ibrahim, President of the People’s Justice Party, Malaysia and former Deputy Prime Minister of Malaysia. “As an exceedingly humble man with profound knowledge and an extraordinary public intellectual, he was a pioneer of social justice and administrative reform for the Muslim Ummah.

His honesty, efficiency, and personal life are a beacon for present and future generations.” Dr. Anwar Ibrahim was speaking as the main speaker at an international memorial webinar held online on Saturday night, July 3, 2021, on “the thoughts and contributions of former secretary to the government of Bangladesh and eminent economist Shah Abdul Hannan”, organized by Bangladesh Institute of Islamic Thought (BIIT) in collaboration with International Institute of Islamic Thought (IIIT), East and Southeast Asia.

Dr. Anwar Ibrahim, Chairman of the IIIT Board of Trustees, added late Shah Abdul Hannan thought deeply about the contemporary problems of the Muslim Ummah and their solutions, including the Islamic banking system, gender equality, the establishment of social justice, and the eradication of corruption. He had a keen interest in learning and acquiring knowledge. He has worked tirelessly to establish Islamic values. His ideal must be passed on to the next generation.

Referring to his personal meetings and conversations at different times with Shah Abdul Hannan, Dr. Anwar, founder of Malaysian Islamic Youth Movement (ABIM), said He was a truly responsible Dayee Ilallah (a person who invites people to the way of Allah). He continued the intellectual propagation of Islam through his work and the writing of books. He has built many organizations, including the establishment of an Islamic bank.

These institutions are benefiting the youth of Bangladesh as well as the youth of the Muslim world. Furthermore, he has left a mark of honesty and professionalism wherever he has worked in various ministries of the government, including anti-corruption agencies. Thus, he has also contributed a lot to the economic development of Bangladesh. Dr. Anwar thinks that young people have a lot to learn from such a scholar and intellectual man.

Referring to Shah Abdul Hannan as a man of a positive mind, Dr. Ahmed Totonji in a written statement said, “I am not alone, many others are followers of his real life.” Shah Abdul Hannan never had any negative thoughts. He was always a positive-minded person and at the same time a teacher of teachers. Dr. Totonji further said, “As far as I personally know or recognize, Shah Abdul Hannan was a man of solid white mind.” I myself have been inspired by his actions and thoughts.

Throughout his life, he has worked for the establishment of Islamic values. After all, he was a great writer. We must also take responsibility for the global expansion of his writings.

He said that Shah Abdul Hannan had a deep knowledge of many subjects. He encouraged people to acquire knowledge. I have also benefited a lot from his inspiration.

Professor Dr. Kamal Hassan said that Shah Abdul Hannan was an asset to the Muslim world. I met him in Bangladesh and learned a lot from talking to him. He was a mentor to many and lived a very simple life. He had a responsibility towards Bangladesh. For this, he established many international standard institutions there.

Professor Dr. Omar Hasan Kasule said that though we are here for the webinar of late Shah Abdul Hannan, actually this webinar is for us. We are here to study the achievements of this great man, emulate him, and learn from him, so we are the greatest beneficiaries of this gathering.

Referring to his memory of a decade and half of the interaction with the late Shah Abdul Hannan, Dr. Kasule said, I found him to be an original creative analytical thinker.

Whenever I had an encounter with him, I came up with a new idea because he was always innovative.

Really his intellectual acumen was based on his strong ground in Usul-al-Fiqh (Principles of Islamic jurisprudence) and this explains what I agreed with him a lot because I also think and work based on Usul-al-Fiqh. Dr. Kasule ended by emphasizing that let us take this lesson from Shah Abdul Hannan that his Usul-al-Fiqh background made him a very methodological, consistent, and analytical scholar, and that is the result, he made all the contributions you have seen him making.

Most of them in the field of economics, but he made contributions in all other areas. His articles, written 20 or 30 years ago, are still relevant because of the application of the Usul-al-Fiqh methods.

Professor Dr. Osman Bakar said, I have been to Dhaka many times and met him several times. We discussed various issues with him at that time. Talking to him, I realized that his thinking was world-class. He has a universal interest in knowledge and his interest is not confined to one single branch of knowledge. As a profound thinker, he wrote covering different areas, and this is important for any leader of the Islamic movement.

He was an intellectual activist, a man of dawah, education, so he was a man of many dimensions. our Muslim leaders need to emphasize acquiring deeper knowledge on Islam and certainly, we can be inspired by him.

Professor Dr. Jamil Osman said that Shah Abdul Hannan was an asset not only to Bangladesh but also to the Muslim world. He contributed to Islamic economics. He has a unique role in the establishment of the Islamic Bank.

Habib Chirzin said I met him in Dhaka. At that time, we were discussing Islamic economics. Then I got to know his deep knowledge about this subject. His thinking was very modern and of high quality. The younger generation can get inspiration from him.

His unique work is the introduction of the Value Added Tax (VAT) system in the country and the implementation of the Islamic banking system. Although he worked in many important offices and ministries in his life, he was a shining example of honesty.

Dr. Nasima Hassan said Shah Abdul Hannan was always worked to spread Islam. He was a practicing Muslim. He called on women to come forward in the propagation of Islam. He also played a vocal role against Islamophobia.

The president of the program Dr. M Abdul Aziz said Shah Abdul Hannan is himself an institution. The best way to remember or honor him is to embrace his balanced thoughts, principles, and personal life practices and to manage and strengthen all the institutions he has established by his mission and vision. Then his dream will come true, and it will continue indefinitely in his account as a sadaqah jariah.

Apart from this, various eminent persons took part in the discussion and said that the life of Shah Abdul Hannan must be passed on to future generations. For the greater benefit and interest of the country, the nation, and the people, the life and works of Shah Abdul Hannan, a man of rare character and versatile talent, must be analyzed rising above partisanship.

The event was attended by more than a thousand people from around the world, including the United States, United Kingdom, Malaysia, Indonesia, Saudi Arabia. At the end of the program, a prayer was conducted for the salvation of the departed soul of late Shah Abdul Hannan.

* Dr. Foyasal Khan is an IIIT Scholar and a Research Fellow at the Bangladesh Institute of Islamic Thought. He can be reached at foyasal.khan@gmail.com

Islamic Finance Assets To Hit $3.7 Trillion By 2024
Next Post:How a Local Non-Profit Medical Clinic Fought COVID-19, One Shot at a Time