Gulf Arab states have the highest levels of food security in the Arab world but need to improve quality and safety standards, according to the Economist Intelligence Unit.

Kuwait led regional rankings, emerging as the 28th most food-secure country in a survey of 109 states in the EIU’s 2014 Global Food Security Index. The United Arab Emirates was ranked 30th and Saudi Arabia came in 32nd.

Food security is a major issue for Arab states where arid landscapes and water shortages have forced many countries to spend billions on food imports. It has also emerged as a political issue as high food prices were partly to blame for the Arab uprising of three years ago. But the EIU notes that food security in the region has improved dramatically since then, partly as food prices have come down from their highs of 2009-2010.

“Eight out of 12 countries in MENA improved their scores from a year ago, but the gains were restrained by lower real GDP per head,” the EIU noted. The economies of several countries have been shaken as they transition to new leadership while those of others have been affected by conflict and heightened political tension in the Middle East and North Africa.

While the region fared reasonably well on the affordability metrics, it experienced declines in the availability index, due to higher volatility of agricultural production.

Gulf states, which depend heavily on food imports, have emerged as more food secure than countries like Morocco, which are largely self-sufficient in food supplies and are major exporter of food products.

GCC countries have also taken measures to improve domestic production despite heavy costs. The Abu Dhabi farming industry, for example, is forecast to produce 38,000 tons of vegetables and fruits in the current agriculture season compared with 28,000 tons last year.

Saudi Arabia’s food and beverage sector is already a USD 50 billion business and is expected to grow 9% by 2017.

The region did not fare well in quality and safety of food, with the majority of countries falling in ranking.

“Although Yemen was an exception–its score improved markedly as the easing of the country’s political crisis allowed food safety nets to be rebuilt and nutritional standards to improve–in general the Gulf peninsula states continue to suffer from undiversified diets and low protein quality.”

The top five countries in the world with the highest prevalence of obesity are Kuwait, Saudi Arabia, Egypt, Jordan and the UAE.

Increasing wealth and incomes, urbanization, greater access to supermarkets, declining food prices and changing diets may contribute to increased obesity, notes the EIU, adding that the relationship between obesity and food insecurity is nuanced and not immediately obvious.

Abundance of food availability in some countries has led to wastage.

A study by King Saud University revealed that 4,500 tons of food is wasted every day in Saudi Arabia. Nearly a third of food prepared during the fasting month of Ramadan is discarded, costing SAR 1.2 million (USD 320,000). 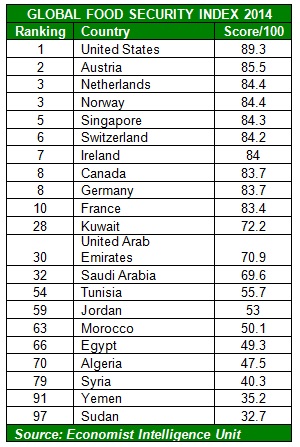