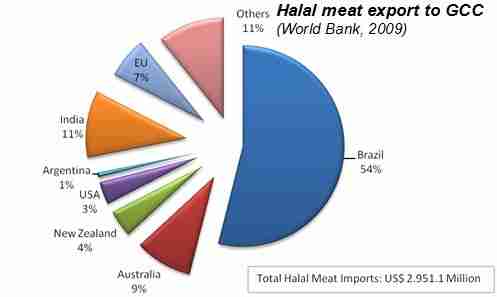 All the top 10 exporting countries of Halal products globally are non-Muslim states. It must be a wake-up call for Muslims as most of the halal food they consume is produced and exported by non-Muslims. According to recent estimates, almost 85% of halal food is produced by the countries where the Muslims are in a minority. We do not see any global halal brands managed by any Muslim-majority countries. The top five countries exporting to Organisation of Islamic Cooperation (OIC) countries are Brazil at $16.2 billion; India at $14.4 billion; the USA at $13.8 billion; Russia at $11.9 billion; and Argentina at $10.2 billion, according to the State of the Global Islamic Economy Report 2020-2021—an annual study produced by US-based research organization Dinar Standard and supported by Dubai Islamic Economy Development Centre.

Halal food is the safest food for consumption and even non-Muslims have recognized it.OIC countries have the capacity to become Kitchen of the World for Halal products as it has a huge potential to win a major share out of the total $3 trillion Global Halal markets. There was a strong need to develop standards of our Halal products to boost our exports especially in the Middle East and Europe. The promotion of Halal exports would also open up new economic opportunities and employment for the youth and traders.Producers outside the Muslim world, from Brazil to the US and Australia, are performing well into the Halal market and doing a roaring business despite the fact that the concept of halaal entirely belongs to Muslims.