Pak Meat Exports on the Decline 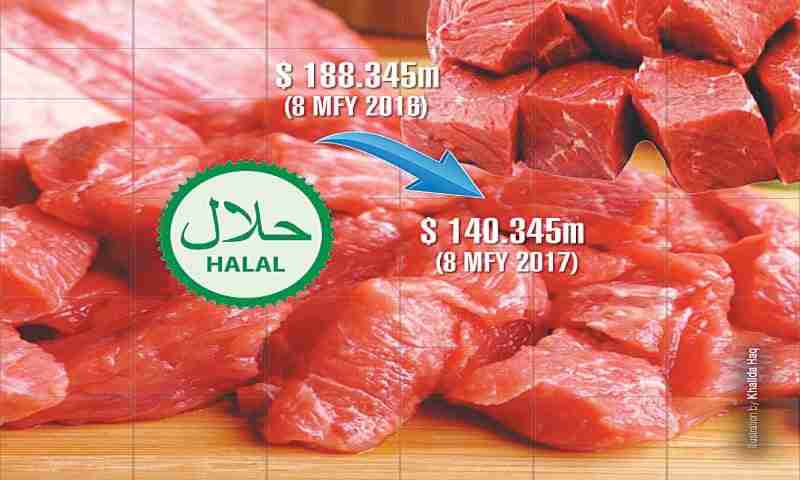 PAKISTAN’S meat exports are on the decline despite a global trend of rapid growth. The Trade Development Authority of Pakistan (TDAP) figures that the country’s meat exports have dropped to $140.345m in the first eight months of the ongoing year, from $188.345m a year ago.

International meat trade on the other hand has risen by 16pc to touch the $700bn mark.

A look at the country’s monthly exports is decelerating. In February 2017, the meat exports dropped 42.67pc as compared with the figures in the same month of the last fiscal year.

The decline is although the country has taken measures to regulate, facilitate and bring the halal business in line with the internationally acceptable standards. It has also signed MoUs for the supply of halal meat to the Gulf states.

Those in the meat business believe that Pakistan’s meat export volumes can be tripled with the right policies and incentives within a couple of years and they blame the government for its failure to maintain a smooth and reliable supply chain.

The number of cattle should be double the number of the human population to enter the meat export trade, says Naseeb Ahmed Saifi, one of the major players in halal meat exports.

Mr. Saifi claims that the government is cautious in supporting the export of meat fearing shortage in the local market.

But an official of the Punjab Livestock Department argues that the number of animals is not less than what is required for smooth supplies for meat exports. Over 80m or almost half of the country’s total animals population is hosted by Punjab.

This official, however, admits that there are issues with genetic pollution, nutrition, and vaccination of the animals.

He says only 7pc buffaloes and 26pc cows are genetically pure (not mixed breeds), while 71pc farmers are either landless or each owns less than five acres of land. They don’t have land to grow fodder for their cattle. And only 16pc animals have vaccination cover, thus ailments reduce their weight.

Ban on the slaughtering of female cows and goats and consequently,, a rise in the prices of male animals in the province is being presented as another reason behind the declining exports.

“The ban has resulted in at least Rs100/kg increase in mutton’s prices,” says Agha Naimat, another meat exporter. “We cannot compete in the mutton export market against India and other international players.”

Mr. Saifi also says that unlike India, where meat exporters are being offered Rs3/kg rebate through one-window operation, as and when an exporter submits an invoice; here we have to run from pillar to post to get a rebate.

The UAE’s allowing transportation of halal products from Pakistan through the sea has also failed to stir enthusiasm among meat exporters, though the measure will cut freight charges by at least one-third.

Mr. Saifi says this facility carries risk since chilled meat does not have more than four days of shelf life. “Most of the meat exports to the UAE and other Gulf countries are in chilled form and not frozen. The export through ships will take at least a day and a half leaving only almost the same period for its onward supply and consumption. In case of any accidental delay in transportation, the consignment will run its shelf life and will be rejected.”

Optimistic about the future of halal food exports, Justice Khan says some quarters are not aware that the UAE authorities have agreed to accept two-week shelf life of chilled meat.” From the UAE, he says, a Pakistani businessman is ready to airlift the consignment for onward delivery to Europe.

Being a Muslim-majority country and with almost a 100pc halal food chain, he says, Pakistan has an edge over the non-Muslim players, particularly India whose meat is of inferior quality than that of Pakistan’s.

The halal certification and safety regulations, complying with international standards, are set to strengthen Pakistan’s position in the meat export business, he adds.

Though his organization has nothing to do with marketing, he added, it is working to promote halal food through awareness campaigns and training of potential investors and butchers.

By getting affiliation with Jakim — a halal food certification company of Malaysia — the PHDA has helped in sending the first consignment of 2,550 tonnes of mutton and 34,794 tonnes of beef to Malaysia last year.

It is also coordinating with the federal authorities for organizing a visit to local meat and chicken plants by Chinese officials and businessmen in June, hoping to open the Chinese market for local halal foods.