The Absolute Best Halal-Cart Chicken and Rice in New York 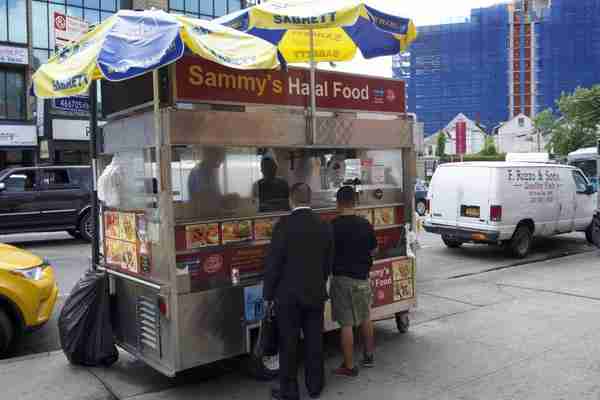 There are dozens and dozens of halal carts in this city at any given moment. It would be impossible to visit them all, let alone try every dish from each: Many of them move around, and many offer an almost dinerlike array of options — from lamb kebabs and chicken biryani to Philly cheesesteaks and Jamaican beef patties. But here, we present a ranked list of those carts that have risen to name-recognition status and park at the same location all the time, by way of one representative dish: chicken over rice. These are the absolute best iterations in New York, giving “street meat” a good name.

A frequently used selling point for this especially sleek, trim midtown cart, with its cheerful green signs and laminated press clippings, is that the chef and owner, the Bangladesh-born Muhammed Rahman, used to cook at the Russian Tea Room — which is funny, considering that the Russian Tea Room is a restaurant not particularly known for its food, which is, of course, Russian. But perhaps his time there is what inspired his formal-yet-friendly vibe, and the culinary standards he abides by, which you’d sooner expect at a sit-down establishment where the chefs wear toques and whites, as he does in the cart than at a fast-food cart.

The chicken in his chicken-and-rice platter is leg meat unless you request breast — rubbed in a spice mixture and freshly grilled; then chopped into perfectly bite-sized, slightly crispy, succulent chunks; and served with fragrant basmati rice and a salad that is dressed, unlike the usual cart offering of just plain shredded lettuce.

The white sauce, which at so many other places tastes flatly like mayonnaise, is exceptional — a tangy blend of cucumber, Greek yogurt, sour cream, and cottage cheese (plus sugar, lemon juice, and vinegar) — and the hot sauce is unusual, too: bright green and flecked with pepper seeds, pleasingly piquant, but round and smooth. It makes a pretty picture and comes in a clear plastic clamshell, instead of the standard Styrofoam, so you can gaze at it lovingly while you take it back to your office or the nearest bench.

The price, which tends to fluctuate slightly, is a bit higher than most, at around $7.50, but it’s worth it. You can call in advance to order, and they even take credit cards.

Midtown is lucky: Around the corner from our top pick is another gem, this one run by a kindly husband and wife, who makes a killer chicken and rice. The dark-meat chicken is finely chopped and juicy, and golden brown from its aggressive, deeply flavorful Indian-spice marinade, and flecked with sautéed onions and pepper.

The fluffy basmati rice is stained with turmeric to a satisfying shade of yellow, and the tangy white sauce is just the right consistency, on the thinner side, to double as a dressing for both the chicken and the salad, which is made with shreds of romaine lettuce, sliced cucumber, and fat wedges of tomato. The whole thing gets a last-second sprinkling of ground cumin, and there’s hot sauce available, too. As with Kwik Meal, you can call ahead to place an order, or order online. They don’t take credit cards, but the meal is a steal at $5.50.

On the one hand, there’s something super shady about the way this outfit is a full-on Halal Guys impostor — down to the yellow T-shirts and plastic bags, and the plastering of the words “Original” and “We Are the Original” all over the cart and its umbrellas, trapping unsuspecting customers who don’t realize they haven’t yet made it to 53rd Street. On the other hand, you kind of have to admire the bravado and the hustle; this is New York.

All that aside, it’s said to be run by a Halal Guys defector, and the food is extremely similar and almost as good: The chicken is just a tad too peppery, and the hot sauce is harsh enough that you might want to skip it; but the white sauce, which comes fresh from a squeeze bottle, is much more flavorful; and the rice and pita are pretty indistinguishable. You could do worse than to end up here, if the line is too long upon 53rd, or if you just can’t bear to walk another block.